”Then saith one of his disciples, Judas Iscariot, Simon’s son, which should betray him, Why was not this ointment sold for three hundred pence, and given to the poor? This he said, not that he cared for the poor; but because he was a thief, and had the bag, and bare what was put therein.” John 12:4-6

Judas is the man who comes down through history as the villain of villains - the man who betrayed Christ for the price of a slave. [Ex. 21:32] How do you move from being a disciple of Christ to His betrayer? How do you go from working miracles to selling your soul? 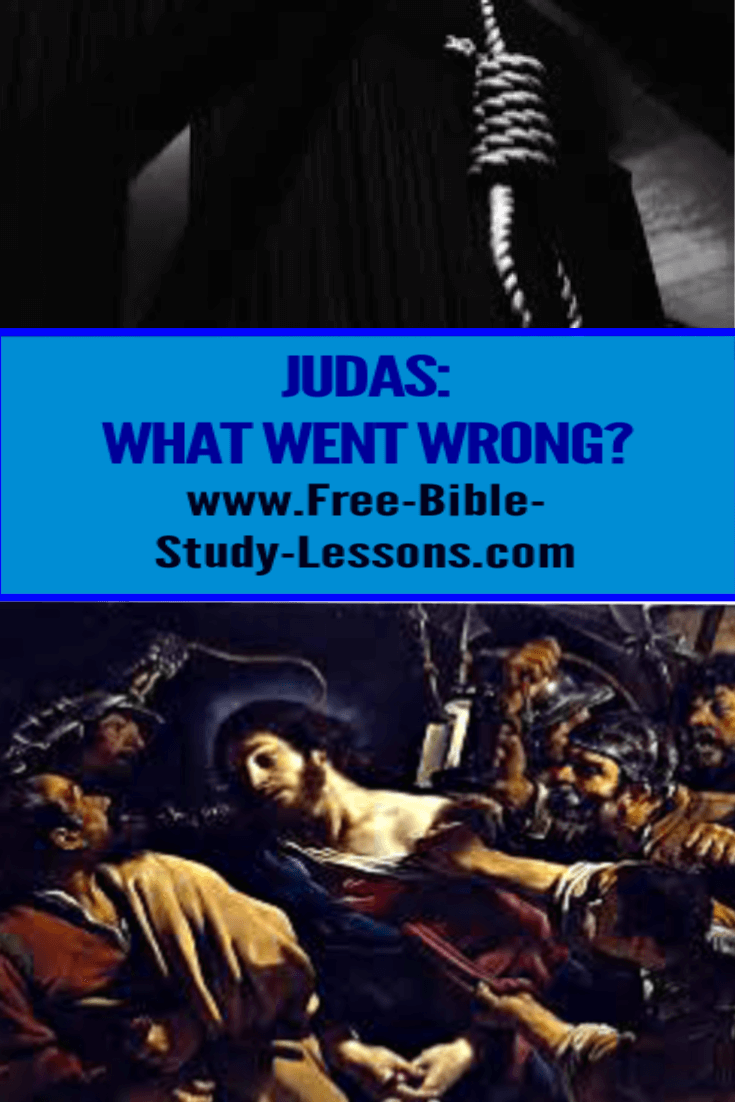 You may disagree, but here are my deductions from what we do read in Scripture.

Judas accepted the call to discipleship because he believed Jesus was the Messiah. His vision of the Messiah [which was the same one the other disciples and the Jewish nation had] was that the Messiah was going to overthrow the Roman Empire and rule the world from Jerusalem. He didn’t mind making the sacrifices along the way as long as he was in on the ground floor of the new “Golden Age” of the nation of Israel. In short, he was not interested in Who Jesus was, but only in what he could get [or expected to get] out of it. His hidden motives were wrong from the start.

Judas was pleased when Jesus made him the treasurer, not because he appreciated the honour and responsibility, but because he could now embezzle funds easily. He could give himself an “advance” on what was going to be his when Jesus established His Messiahship. So the wrong motive from the beginning increased into a secret sin along the way. No one would ever know, he was very careful.

With bitterness he thought of the three years of his life he had wasted following Jesus. It wasn’t that he disliked Jesus Himself, but he realized that there was nothing in it for him. It was time to leave and seek his fortune elsewhere, but why not profit on the way out? Give Jesus into the hands of the chief priests who hated Him, make some money, and start again. Because Judas was blinded by his own greed and ambition, it never occurred to him that the chief priests would press for Christ’s crucifixion. He thought there would be a whipping, an humiliation, an exposure that Jesus was not the Messiah of popular Jewish vision. Maybe he would even be viewed as a hero for exposing Jesus as a fraud. That terrible night his fantasy was burst as he discovered the real intent of the Jewish leaders. He knew Jesus was innocent and when he realized how far they were going to go he tried to undo his wrong, but it was too late.

To answer our beginning question: Judas moved from disciple to betrayer by small hidden sins. He was not willing to come to the Light to have his sin exposed and forgiven. He enjoyed his sin and wrong motives, they weren’t hurting anyone, and no one would ever know. But when the big temptation came the small compromises had made it a natural step. And he took it without consideration.

It is a lesson for us. No sin is small enough to live comfortably with. Hidden or secret sin must be dwelt with whether it is confession before others or before God alone. If it remains hidden it will grow. Maybe we secretly enjoy it too much to let it go. It must be brought to the Light. Maybe it doesn’t appear to be hurting anyone [but it is]. If we don’t deal with it now, when the big temptation comes along we will fall into it as the next natural step. The trap will spring shut and our lives will be devastated. Adultery doesn’t happen without thoughts, words, and secret desires building up to it. Theft doesn’t happen without hidden sins. Even murder is led to one secret step at a time. How many homes, churches, and businesses have been ruined by secret sins “that no one will ever know” manifesting themselves in a big fall.

Solomon’s instruction is still the best: “Keep thy heart with all diligence; for out of it are the issues of life.” [Pr. 4:23]