Sometimes life does not go as we plan.  We have hopes and plans and dreams.  Then something happens.  They are dashed into a million pieces and we end up living with disappointment.

Maybe we had dreams of a wonderful life-time marriage but divorce, death or the actions of our spouse destroyed our beautiful plans.  Maybe we had hopes of a bright future for our child/children but disease, death or rebellion brought an abrupt halt to our desires.  Maybe we had unsaved loved ones [or even saved loved ones making bad decisions] who seemed to keep going in the wrong direction regardless of how much we prayed for them.  Maybe we had thought our job secure and our financial future bright, then out of a blue sky lightening struck and everything changed.  Maybe a stoke or other disease attacked us and we are unable to function as we want to.  Or a million other ways our individual or family plans can end up temporarily or permanently destroyed.  The result is that we are living with disappointment.

Sarah [Sarai to begin with] knew what it was like to be living with disappointment for most of her life.  She was a very beautiful woman [still desirable to other men when she was 86 years old - Gen. 20!].  She seemed to have everything going for her.  She married a good man.  In a culture where polygamy was common, there is no record that Abraham ever had another woman until he married Hagar - at Sarah’s insistence.  Like most young women, she had dreams of a family.  Sometime shortly after marriage that dream was crushed.  She discovered that she could not have children [Gen. 11:30]. 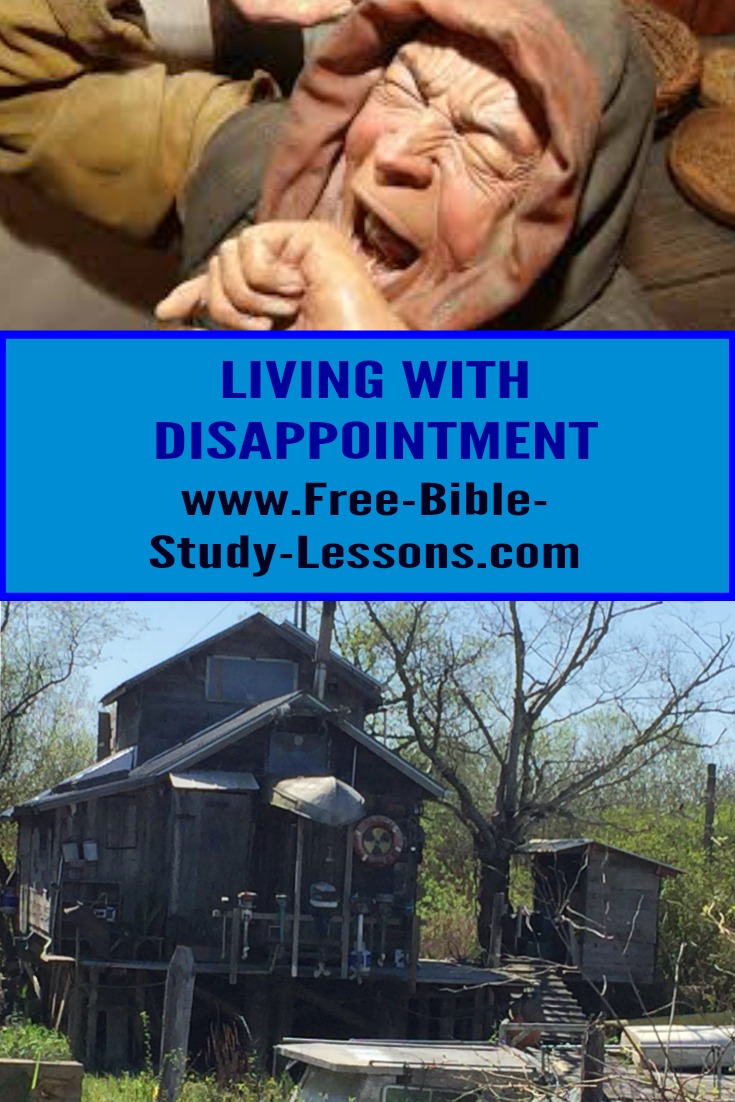 In our modern western society, which officially accepts the murder of children as a mother’s right, it may be hard to imagine how devastating such a realization was.  For most women in ancient society their life was centred on their home and children.  Not having children would usher in loneliness and a loss of purpose in life.  Society would consider her cursed.  Other women would laugh, pity or ignore her.  Other men would encourage her husband to take another wife so he, at least, could have a family and heirs.  Sarah would be living with this shattering disappointment for 89 years!

Was she happy when her husband heard from an unknown God and moved his family to parts unknown?  Perhaps, but she knew no matter where she went her condition would soon be known and the laughter, rejection and loneliness would continue.  You can’t escape from your own body!

In spite of this, we never once read where she blamed God or her husband [after all, until Hagar became pregnant it could have been Abraham’s problem].  Many people who are living with disappointment blame God or become bitter and angry.  In so doing they not only ruin their own lives, but also bring pain and destruction into the lives of others.

I am sure Abraham had many times shared with her the promise of God for an heir through her, but she does not seemed have believed the promise until after she was rebuked for laughing at it [Gen. 18:6-15, Heb. 11:11].  She had lost hope for herself, but she did not allow that to hinder her relationship with Abraham or the managing of a large household - although none of the members were hers.

At one point Sarah, realizing that she could “never” have a child, came up with a plan to get a child of her own.  She would have someone else have a child for her!  To be fair she waited until she was 75 years old.  That’s a lot of patience when you are living with disappointment.  It failed and she was left feeling even worse than before.

Yet, in the timing of God, when she was 90 years old she gave birth to Isaac and had the joy of living with him for 37 years.  All her pain and suffering turned to joy.  The last 37 years of her life were her most exciting and fulfilling years.

What would have happened if Sarah had been a “normal” woman and had had many children throughout her life?  She would have been happy in life, but world history would have been changed.  Abraham would never have had to prove his faith so he would not have become the Father of the Faithful.  Isaac would not have been the only seed.  Israel would not have come into existence to be the womb through which the Messiah would be born.  This was so much bigger than Sarah and her presonal happiness.  But even from Sarah’s point-of-view she would never have known the intense joy of seeing a dead dream come to life.   I doubt at the end she would have traded Isaac for all the children she could have had.

As Christians, what do we do when we are living with disappointment?

1.  It is not wrong to grieve for a season, especially if it involves the death of a person or a marriage.

3.  We realize that even though our disappointment is real and our pain may be deep, God is good.  He is sovereign and in control.  He has a higher purpose for our benefit and for the benefit of others.  We may not understand what it is.  We may never understand what it is.  However, we trust Jesus Christ - bringing our dashed hopes and tears to Him.  Like Mary, we sit at His feet and listen to Him.

4.  We learn to move on in life.  We do not allow bitterness to harden and destroy us and others.  How many marriages have been broken up because of the tragic death of a child and one partner who refuses to move on?  Instead of losing one, they have lost all.  The past cannot be changed.  We can only trust Jesus and see what good can come out of it as we go forward in Him.