Why Did God Want To Kill Moses?

On the way to Egypt, God met with Moses with the intention of killing him.  Many people are unaware of this incident in the life of Moses.

Let’s start by considering the timing of this almost deadly encounter.  Moses had seen the burning bush.  God had convinced him to be His messenger and servant to deliver His people from slavery and bring them into the Promised Land.  God had already given him the three miraculous signs by which Moses was to convince the Israelites that he really had heard from God.

Moses had told his father-in-law, Jethro, that he was returning to Egypt.  He had packed up his wife and sons and begun the journey back to Egypt in obedience to God.  God had just finished re-confirming that He would do wonders in Egypt through Moses.  God even told him that Pharoah would lose his first born son if he refused to let the people go.  Moses was not some wayward stranger who got into trouble.  He was a personally chosen minister of the Almighty God enabled to work miracles.  And then, on the way to Egypt to fulfill God’s plan, God met Moses to kill him.  Why?

Which Covenant Was Moses Under? 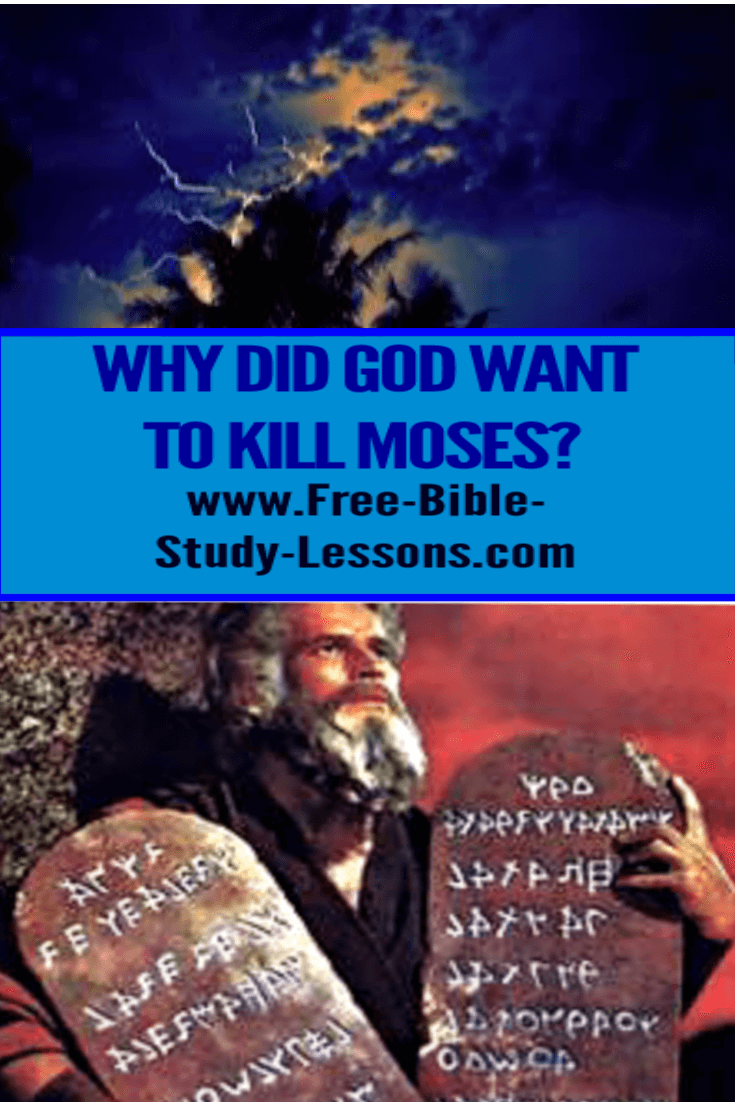 Next let’s consider under which of God’s Covenants Moses was living under.  When we think of Moses we usually think of The Law and the Mosaic Covenant.  However, this was before the Law was given so Moses was living in the previous Covenant made over 400 years earlier.

Then God said to Abraham, “As for you, you must keep my covenant, you and your descendants after you for the generations to come.  This is my covenant with you and your descendants after you, the covenant you are to keep: Every male among you shall be circumcised.  You are to undergo circumcision, and it will be the sign of the covenant between me and you.  For the generations to come every male among you who is eight days old must be circumcised, including those born in your household or bought with money from a foreigner—those who are not your offspring.  Whether born in your household or bought with your money, they must be circumcised. My covenant in your flesh is to be an everlasting covenant.  Any uncircumcised male, who has not been circumcised in the flesh, will be cut off from his people; he has broken my covenant.” Ex. 17:9-14, NIV

At his point in his life, Moses was under the Abrahamic Covenant.  The Abraham Covenant required males to be circumcised as a sign of the Covenant between God and man.  Moses had not circumcised his sons.  This man:

who was going to represent God to a heathen king,

who was going to deliver the judgments of God for rebellion on Egypt,

who was going to deliver God’s people from slavery,

who was going to be given the Law of God and shape loose tribes into a mighty nation,

who was going to lead them into all God’s promises,

was in blatant rebellion to the existing Covenant.

God could not have His Covenant representative living in violation of the Covenant!  Either Moses would have to get serious about his duties, walking in obedience to the Covenant, or God would be obligated to kill him and begin again with someone new.

Why Had Moses Not Circumcised His Sons?

The Bible doesn’t say, so we can only take educated guesses.  Perhaps living in Midian, far from the Covenant people, Moses simply got careless.  Maybe he thought his failure had driven him outside of God’s plan, so what was the point?  He named his first son Gershom - which means foreigner.  He was discouraged and content with just drifting in his new life with nothing to remind him of the dreams that had died when he fled from Pharoah.  Of course, he had Joseph as a shining example that even in a foreign country, under hostile circumstances, there was no excuse for abandoning the God of the Covenant.  But depression and self-pity probably played a role in Moses’ life at this point.

When he knew he was going back to Egypt as God’s Covenant representative, why didn’t he circumcise his sons then?

1.  He just forgot about it.  A lot was happening.  However, forgetfulness is no excuse for disobedience.

2.  God had had to work hard to convince him to return.  He was done with his dream of deliverer and just wanted to be left alone.  After reluctantly agreeing, he may have had some silent resentment or bitterness against God that expressed itself in refusing to circumcise his sons.  Resentment and bitterness are deadly killers.  Like sharks, they swim unseen beneath the surface waiting to strike.  If they are in our lives, we need to root them out ruthlessly before they destroy us.

3.  Perhaps it was a family matter.  Zipporah, who was not an Israelite, may have been against it.  She obviously knew its importance by knowing how to save her husband’s life, but she may have been pressuring Moses against it before God made it a life and death issue.  And Moses, like many men, had chosen to listen to his wife over God.  The husband/wife relationship is the second most important relationship in the world, but it can never take priority over the God relationship.  Honouring and obeying God is always first.

In any case, we know Zipporah circumcised the boys and Moses’ life was spared.  He was then able to move on to accomplish the will of God.  We can only go so far with God if we keep hidden sins and rebellion in our lives.  There will come a point where God says, “Enough is enough.  Go all the way in commitment, or don’t go at all.”

Important Point About The Abrahamic Covenant

One last thing thing I want to point out.  There are prominent Christians today who are discovering and teaching the Covenants of God.  Many times, though, they make a serious error in the Abrahamic Covenant.  They teach that the Abrahamic Covenant was a Grant Covenant [an unconditional Covenant].  God does not make unconditional Covenants with mankind.  As you can see for yourself from Ex. 17:9-14 above, circumcision was one condition of this Covenant.  It was so serious that the violation of it meant being “cut off” from the people of God.  In Moses’ case, because he was to be a Covenant representative, it meant his life if he continued in disobedience.

Covenants are an important topic and I would suggest you take our Love Covenants course to study in depth the seven major Covenants God has made with mankind.