"When the enemies of Judah and Benjamin heard that the exiles were building a temple for the Lord, the God of Israel, they came to Zerubbabel and to the heads of the families and said, “Let us help you build because, like you, we seek your God and have been sacrificing to him since the time of Esarhaddon king of Assyria, who brought us here.”

"But Zerubbabel, Joshua and the rest of the heads of the families of Israel answered, 'You have no part with us in building a temple to our God. We alone will build it for the Lord, the God of Israel, as King Cyrus, the king of Persia, commanded us.'”  Ezra 4:1-3 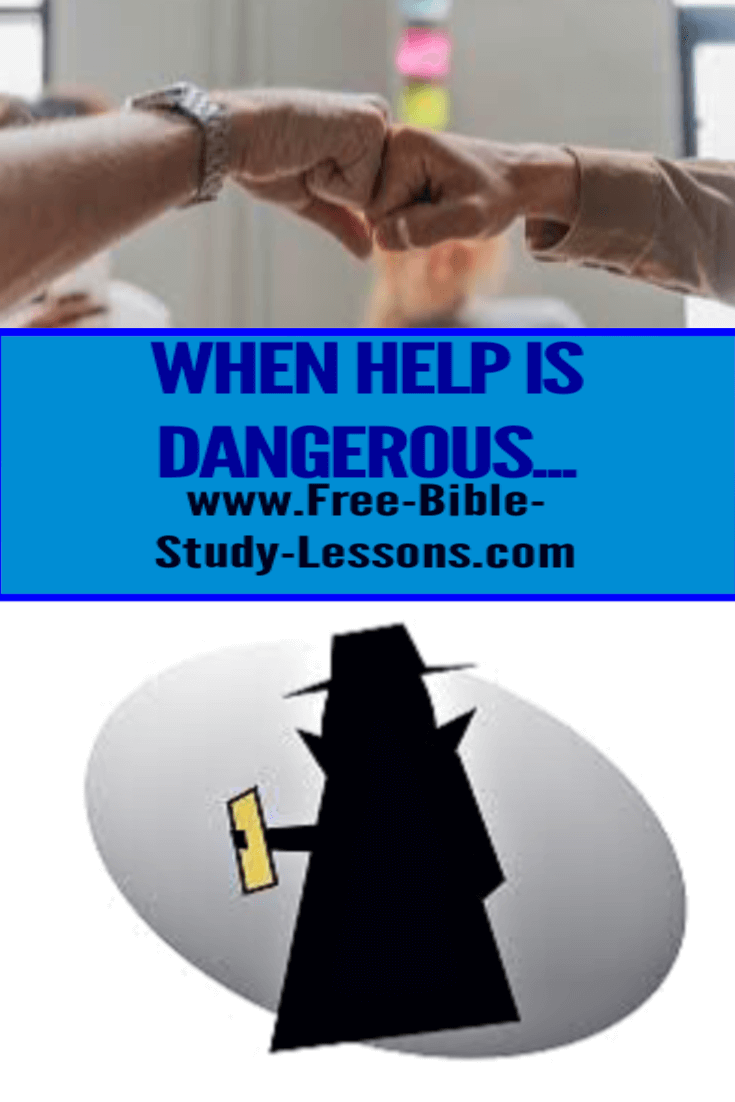 Like the military, Satan has two main ways of attacking the Church.  He will do it by direct attack from outside forces or he will try to infiltrate the Church and use his inside agents to destroy the Church.  In the Scripture above, we see an example of an attempted infiltration.  These people were enemies who pretended to be friends…all they wanted to do was help…

On this occasion the leaders of Israel were wise.  They rejected the "help."  Today we see that many once Christian institutions have been infiltrated.  Atheists fight to become Navy Chaplains, Bible schools turn out ministers who do not believe in the basic doctrines of Christianity, pastors are confused over clear issues like abortion and homosexuality, many Christians accept evolution over the clear teaching of Scripture, etc.  Our ranks have been infiltrated… but they just want to help.

In our desire to be non-offensive and to be accepted by the world, we accept all kinds of "help."  We allow wolves to prowl in our midst because exposing and opposing them would not be popular.  We would been seen a divisive, prejudice and close-minded.  [As comedian Mike Warnke said, "I can afford to be close-minded, I'm right.]  And so many of the people of God are deceived and led astray.

Also, this leads to the sad fact that many people walking through our communities and lives claim to be Christians, but have never personally accepted Jesus as Lord and Saviour.  In some cases, they have even rejected the "Christian lifestyle" but still cling to the name of Christian.  They want to have the comfort of the Name, a feeling that they have escaped hell, or some other motive while still living however they choose to live.  The devil does not worry about them.  They can hear a sermon - many times watered down or downright socialistic - and never feel the conviction of the Holy Spirit.  They are safer, from the devil's perspective, than the drug addict or pervert who may recognize they have an empty life and start looking for real answers.

So what do we do with the infiltrators?  Our course of action depends on the situation.

Infiltrators who are deliberately teaching things contrary to the Word of God must be exposed with the light of God's Word.  Some of these people are well-known and liked, write best-selling Christian books or have wonderful TV programs.  They must be shown as false and misleading teachers.  They cannot be allowed to deceive people and wreak lives.  Jesus was very stern with the Pharisees, even calling them "sons of the devil."  His love drew all sorts of people to Him, but His teaching separated the ones who were serious from the ones who were not.  Paul also harshly exposed false teaching and false teachers.  If, when they are exposed, they are genuinely repentant then they can be accepted back into the body of Christ, but their realm of influence should be restricted until they have proved themselves.

Then there are infiltrators who simply have never been confronted with the true gospel.  They think they are Christians because of their parents, their country, what they believe or because they have said a few words, but there has never been a heart change.  They may have been presented with Jesus as Saviour, but they were not informed that Jesus is also Lord.  They were not given the opportunity of counting the costs and making a decision.  Even through they hold the title of Christian they are not Christian in the true sense of the word.  They need to be lovingly presented with the Truth.  They need to see what real Christianity is all about.  They need to know that Jesus is both Lord and Saviour.  They need to see that true belief and actions do connect.  In other words, they need to be treated with the same love of Christ that we would show any non-Christian.  What they do not need is to be allowed to live the illusion that they are Christians.  Of course, they may reject the truth and cling to their fantasy, but then that is their choice.  The where and how of lovingly bringing the Truth must be under the direction of the Holy Spirit.  After all, nobody likes to be wrong.

We, too, must be careful.  We cannot spend so much of our time exposing the false that we lose focus on the Truth.  We tend to become like what we focus on.  We focus on Jesus, we work at building His kingdom and His people, and we expose the false along the way.