The question "Is Jesus Jehovah" is debated on the doorsteps of many homes around the world. Did Jesus claim to be Jehovah God or not? Traditional Christians say "Yes," while JW's [Jehovah Witnesses] and some others say, "No." As Bible students we must go to the Holy Scriptures for the answer. [All Bible quotations are from the New World Translation. The letters SYBT stand for the JW's publication "Should You Believe In The Trinity."]

The Jehovah's Witnesses booklet SYBT states on page 16: "Jesus never claimed to be God. Everything he said about himself indicates that he did not consider himself equal to God in any way - not in power, not in knowledge, not in age." 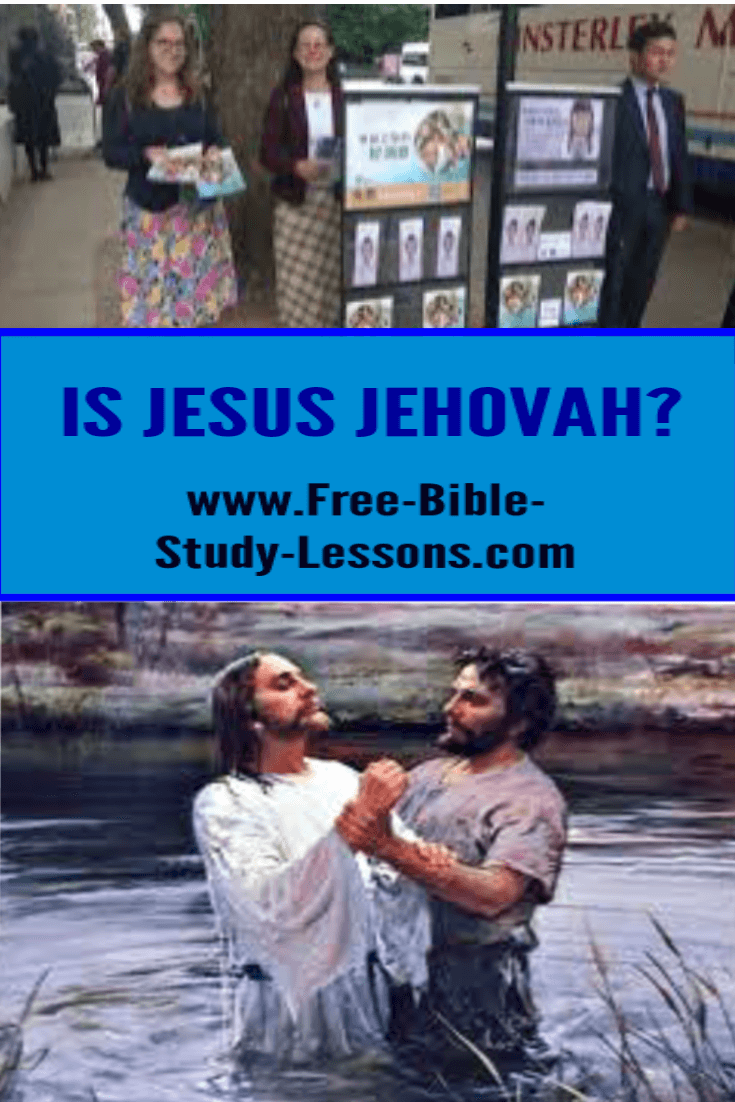 What did the people who personally heard Jesus believe He was teaching?

"On this, indeed, the Jews began seeking all the more to kill him, because not only was he breaking the Sabbath but he was also calling God his own father, making himself equal to God. Therefore in answer, Jesus went on to say to them; "Most truly I say to you, The Son cannot do a single thing of his own initiative, but only what he beholds the Father doing." [John 5:18,19]

Again in John 10:33 the Jews were trying to stone Jesus because "you, although being a man, make yourself a god." If Jesus was not teaching He was God then He should have corrected their misunderstanding. He did not. In neither case did Jesus deny being God.

Jesus taught that knowing Him was the same as knowing the Father, showing that although They were Two, They were also One.

"If you men had known me, you would have known my Father also, from this moment on you know him and have seen him...Jesus said to him: "Have I been with you men so long a time, and yet, Philip, you have not come to know me? He that has seen me has seen the Father [also]. How is it you say, `Show us the Father'?" [John 14:7,9]

Perhaps the most conclusive proof is found in the Book of Revelation. Revelation 1:8 states: "I am the Alpha and the Omega," says Jehovah God, "the One who is and who was and who is coming, the Almighty." There is no doubt as to Who is speaking here. It is plainly revealed to be Jehovah. Now if we turn to the last chapter we will see something very interesting. Here Jesus is speaking and again there is no doubt Who is talking for He says in verse 16: "I, Jesus..." We know Jesus is speaking and yet in verse 13 He says, "I am the Alpha and the Omega, the first and the last, the beginning and the end." Both Jehovah and Jesus claimed to be the Alpha and Omega. In order for that to be true they must be equal.

But the Scripture is also plain that there is only One God. "Listen, O Israel: Jehovah our God is one Jehovah." [Deut. 6:4] If Jesus is equal to Jehovah, He must be Jehovah.

Isn't A Father Superior To A Son?

The Jehovah's Witnesses raise another important point. To quote their own leading question on page 16 of SYBT: "Is God Always Superior to Jesus?" Frequently, Jesus is referred to or calls Himself the Son of God. The basic assumption is the Son must be inferior to the Father.

SYBT declares on page 16: "And Almighty God can rightly be called his [Jesus] Begetter, or Father, in the same sense that an earthly father, like Abraham, begets a son." I couldn't have made the point better myself. If a father makes a bookshelf, he is making something other than himself, but if he begets a son he has made someone the same as himself, i.e. a human being. A human father cannot beget anything which is not human. In the same way, God the Father can make human beings, but if He begets someone that Someone must be the same as He. In other words, in being begotten, Jesus must be God.

Wait a minute! Doesn't that mean there are two Gods? We know there is only one God. A study of the Trinity will have to wait for another article, but any serious student of the Scripture will discover there is only one God and yet there is also in the Godhead three distinct Persons.

These are important questions. The answers are to be found in the duel nature of Jesus [For a detailed look take the e-mail course: The Glory Of Christ]. As we have seen the Son had to be God just as the Father was God; however, when the Son came to earth as Jesus, He laid aside His divine nature. When Jesus walked this earth He did so totally as a human being with no special advantages - except that He was born without sin. "...although he [Jesus] was existing in God's form, gave no consideration to a seizure, namely, that he should be equal with God. No, but he emptied himself and took a slave's form and came to be in the likeness of men." [Phil. 2:6-7] In other words, Jesus did not fight to keep His Godhood, but voluntarily laid it aside to become human. "Therefore, since the "young children" are sharers of blood and flesh, he also similarly partook of the same things, that through his death he might bring to nothing the one having the means to cause death, that is, the Devil." [Heb. 2:14]

Becoming fully human was necessary for our redemption. This completely explains why He could suffer and feel like every other human being. It does not; however, detract one bit from the fact He was also fully Jehovah God.

Another question posed by the SYBT booklet on page 19 is: "If Jesus had been God, how could Jesus have been exalted, that is, raised to a higher position than he had previously enjoyed?" We know God has "exalted him to a superior position and kindly given him the name that is above every name." [Phil. 2:9]

The exaltation of Jesus has nothing to do with previous position. If we read the next verse we find: "so that in the name of Jesus every knee should bend of those in heaven and those on the earth and those under the ground." [Phil. 2:10] We can plainly see the Scripture is saying because He was obedient even to death God exalted Him above all angels, demons, and created beings. Again, we see it is talking about current position not comparing it with His position before taking on human flesh.

Let's look at a couple of verses from the Old Testament before we run out of space.  "'Look! There are days coming,'" is the utterance of Jehovah, 'and I will raise up to David a righteous sprout.' And a King will certainly reign and act with discretion and execute justice and Israel itself will reside in security. And this is his name with which he will be called, Jehovah Is Our Righteousness." [Jer. 23:5-6] Jesus is the sprout or seed of David. And what will He be called? "Jehovah Is Our Righteousness."

"For there has been a child born to us, there has been a son given to us; and the princely rule will come to be upon his shoulder. And his name will be called Wonderful, Counselor, Mighty God, Eternal Father, Prince of Peace." [Is. 9:6] The "child born" and the "son given" are references to Jesus.  And what is His name? It is "Mighty God, Eternal Father."

A Word About The New World Translation Of The Scripture

Please note: I have quoted from the New World Translation not because I believe it to be a good translation but because it is the version used by the Jehovah's Witnesses. I do not recommend anyone use it. It contains many serious errors. In my opinion it is not a translation at all but simply the Bible rewritten and distorted to fit with their beliefs. [Although the above quotes show they have failed to take out everything which disagrees with them.] There are many good, reliable translations available for the modern reader. Some of the best include the New American Standard, the New International Version, and the New King James Version.

As far as the reliability of the New World Translation goes here is a quote from an eyewitness.

"...Aside from Vice-President Franz [and his training was limited], none of the committee members had adequate schooling or background to function as critical Bible translators. Franz's ability to do a scholarly job of translating Hebrew is open to serious question since he never formally studied Hebrew."

"Because of the inadequacy of the translators, the translations which resulted were, in many cases, not those which were accurate renderings of the original languages, but rather they conveyed what the Witnesses believed. This is verified by many qualified Bible scholars..."