Judas, our number one villain, was a nice man.  He was just like us, but he ended up betraying Jesus for selfish gain.  Nero, our number two villain, in perverse hatred tried to destroy the Church. 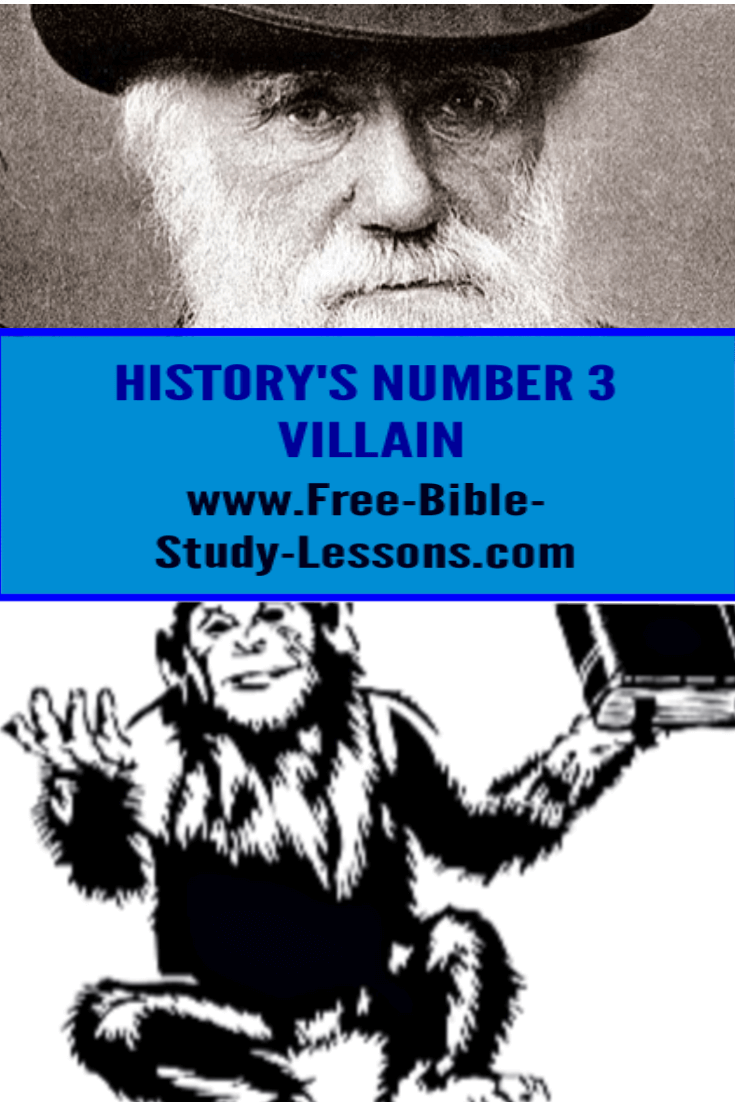 Our number three villain, like Judas, was a nice man that we can identify with.  He was curious.  He wanted to find out things, but his mind was not committed to the Word of God. This man, with good motives no doubt, searched for knowledge outside of God.  He didn't want to hurt anyone.  He was just exploring new territory.

Yet, ideas have consequences.  They do not live in a vacuum.  What people truly believe they will act upon.  Darwin's ideas have motivated the murder of millions of people, have encouraged the growth of sickness and disease, have justified wars, have turned schools into battle zones, have closed down scientific inquiry, have divided Churches, have promoted racism, have strengthen the religious humanistic belief system, and have cut down Western Civilization to its knees.

Now I know what you are going to say, "Murders, wars, etc. having been going on since the Fall so how can you lay all that responsibility at the feet of one man, and his disciples, who lived in the AD 1800's?  You are not being fair."

You are right.  Our number three villain, Darwin, cannot take the responsibility for the acts of other depraved men.  What he did do with his ideas - although they were not original to him - was provide a false scientific justification for these evil acts.

Men, like Hitler and Stalin, would take these ideas and feel justified in murdering millions of people.  Stalin and his followers had over 60 million murdered alone.  Now, instead of being villains and mass murderers, these evil men, using Darwin's thoughts of Evolution, were only "helping" the human race.

Doctors, believing these ideas, resisted the idea of cleansing their hands and instruments which caused much sickness and death.  Surgeons preformed unnecessary operations believing they would only be taking out useless body parts that were left over from a previous evolutionary developmental stage.  And with the evolutionary devaluation of life, abortion and euthanasia are becoming more acceptable and common turning doctors and nurses from healers to killers.

Schools, once safe learning centers, are now dangerous places.   In some North American cities 25% of students fear for their physical safety at school.  Not to mention that schools are now merely humanistic indoctrination centers - not true educational centers.  Children and young people act out the animalistic evolutionary principles they are taught.  Instead of being in the image of God, they are taught they are in the image of a monkey.  No afterlife, no need for self-control, do whatever feels good no matter who it hurts.

Scientists, teachers, and others who dare to disagree with Darwin's ideas on Evolution are mocked, refused promotions, or fired.  Their articles are denied publication.  If you are not in agreement, you are not allowed to speak.  True scientific inquiry is stopped by the religious extremists who hold these Darwin evolutionary ideas today.  Not only that but also some times deliberate frauds are engineered and remain in the textbooks even after having been exposed.  Theories with no collaborating evidence are presented as proven facts.

Churches are often divided.  Many compromise the Word of God in order to accommodate these humanistic religious beliefs.  Of course, every serious religion must have a theory of origins.  Darwin supplied humanism with this vital element. He empowered humanism, with scientific-sounding claims - to make great gains in society.

If you look at the original literature you will be shocked at the racism these ideas promote.  Negroes and Jews especially were considered inferior.  Australian aboriginals were hunted and murdered.  Some of their heads were sent to museums as "evidence" of the missing link.   This connection is downplayed today because it is no longer "politically correct," but it is there.

Yes, ideas have consequences and this Darwin's ideas have led to death and destruction on every level of modern society.  Charles Darwin, in my view, has earn the right to history's number 3 villain title.