We use the small word ‘all’ all the time.  It is such a common little word that we often don’t even notice when we are using it.  Many words in English can have more than one meaning, and we depend on context to determine the correct meaning in a sentence.  Universal words [all, always, anyone, everyone, etc.] sometimes are not meant in a universal sense.  This is also true when we read the Bible.  We need to be aware of context and different shades of meaning.

For example, take a look at my first sentence.  Is it an accurate statement?  I only used the word ‘all’ two times.  Did I really use it all the time?  No, I only used the word two times in over 50 words; otherwise, ‘all’ would have been every word in the paragraph.  Nonsense, right?  Anyone familiar with the English language would know that the sentence would mean something like: We frequently use the word ‘all.’

It is essential that we realize the multiple meaning of words and the importance of context in understanding verses.  Context includes the verses, chapter and book in which it is found and the entire Scriptural teaching on a subject.  [We look at this in the Feed Yourself course].  Some common Scriptures are misunderstood because of failure to understand this principle.  So to answer our question, when is ‘all’, not ‘all’ or when is a universal word not used universally?  Let’s look at some examples. 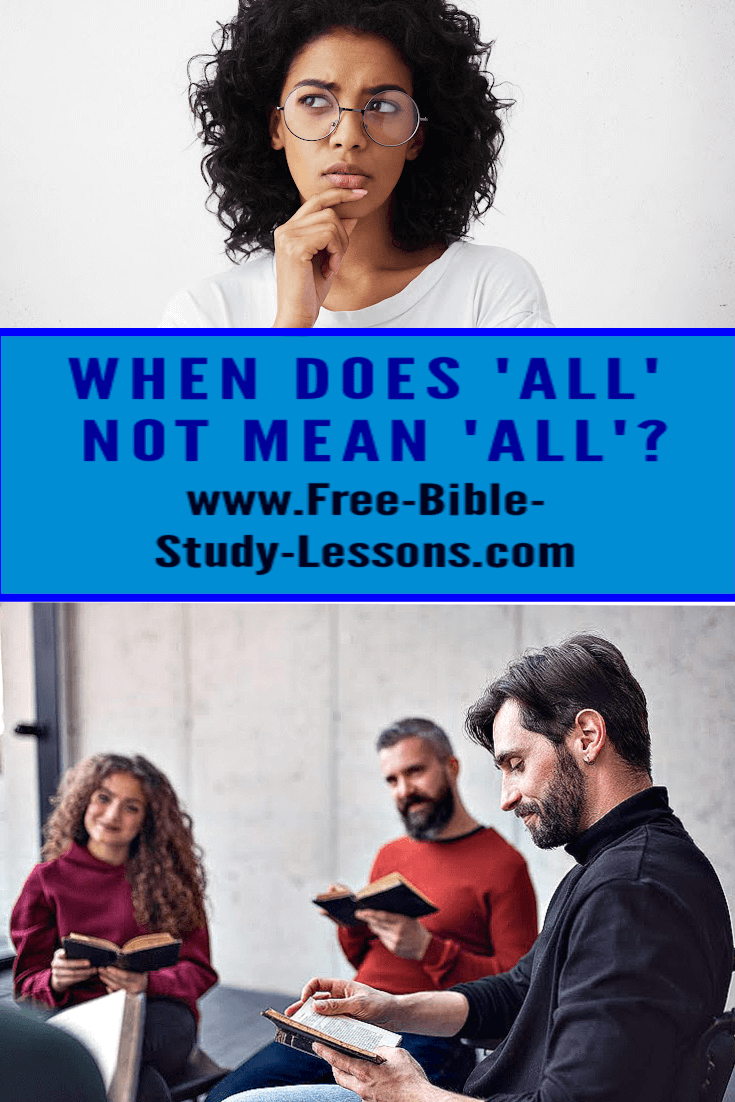 And it came to pass in those days, that there went out a decree from Caesar Augustus that all the world should be taxed.

Did Ceasar decree that everyone in the world should be taxed?  Did he expect revenue from the American Indians? The Chinese?  Of course not.  In understanding context, we know that the Scripture means that part of the world which was under Ceasar’s control.  In fact, the NIV translates this as the ‘entire Roman world’.

But the angel said to them, “Do not be afraid. I bring you good news that will cause great joy for all the people.

Does this Scripture really mean that everyone had joy at the birth of Christ?  Was Herod happy?  Were the Pharisees delighted?  No, so all people - in the sense of every individual - were not joyful.  Does this make it a false statement?  Of course not.  We understand this to mean that all kinds of people would be joyful at the birth of Christ, from the poor to the rich, from the Jews to the Romans to the Chinese.  It is certainly true in that Christmas is celebrated around the world today.

He jumped to his feet and began to walk. Then he went with them into the temple courts, walking and jumping, and praising God.  When all the people saw him walking and praising God, they recognized him as the same man who used to sit begging at the temple gate called Beautiful, and they were filled with wonder and amazement at what had happened to him.

A woman is bound to her husband as long as he lives. But if her husband dies, she is free to marry anyone she wishes, but he must belong to the Lord.

So if a widow chooses a Christian man to marry, he has no choice?  She can marry any Christian she wishes.  Naturally, we realize this universal statement is not doing away with mutual consent.  It simply states that the only restriction on a potential marriage partner is that he must be a Christian.

Does ‘all’ ever mean all?  Are universals ever meant universally?  Sometimes they are.

Through him all things were made; without him nothing was made that has been made.

Everything that has been made in its original form was created by Jesus.  Did Jesus make a computer?  No, but He made the material from which computers are made and the scientific principles/laws which allow them to be made and work.  At a foundational level, everything was made by Jesus without exception.

In him was life, and that life was the light of all mankind.

All the above examples may seem obvious, at least to those familiar with the English language.  I wanted to illustrate this principle with clear examples before looking at Scriptures where the ‘universal’ term is commonly misunderstood.  Remember, context is vital.

The Lord is not slow in keeping his promise, as some understand slowness. Instead, he is patient with you, not wanting anyone to perish, but everyone to come to repentance.

Here we have two universal statements - anyone/everyone.  Many assume this means that God does not want any individual to perish.  But let us look at the context to see if this is a correct interpretation.  At the beginning of chapter three, we can see that Peter is addressing ‘friends’ or fellow believers.  We can go back to the introduction in chapter one and see that the letter is to ‘those…who have received faith’.  Peter is addressing Christians.

We know from other places in Scripture that the Father has given the Son those He has selected [John 17:2, Rom. 8:30, Eph. 1:5, 11].  So when we consider the context and the teaching of Scripture in other places, what does this verse mean?  Jesus does not want anyone the Father has chosen to perish but that everyone given to Him should come to repentance.  The ‘anyone’ and ‘everyone’ is not referring to every individual in the world [that would be the error of universalism] but to every individual chosen by the Father to receive the gift of salvation.  If we say that God wants every individual saved, and it is obvious that every individual is not saved, then we are implying that God cannot accomplish His will.  We are giving man the right to overrule the sovereignty of God.

As for you, the anointing you received from him remains in you, and you do not need anyone to teach you. But as his anointing teaches you about all things and as that anointing is real, not counterfeit—just as it has taught you, remain in him.

Some people have used this Scripture to justify their independent and rebellious nature by saying they don’t need anyone to teach them.  It is just “me and Jesus.”  Is John saying that we don’t need human teachers?  What is our context?  John is referring to not being deceived by false teachers, specifically those who misrepresent Jesus Christ’s deity.  In the teaching of Scripture elsewhere, we see that God specifically gave teachers to the body of Christ [Eph. 4:11] to help it grow and mature.  This Scripture cannot be saying that we only listen to God directly and we don’t need human teachers.  What we do see is that as we are sensitive and submissive to the Holy Spirit, He will guide us away from false teachers and to the men and women, He wants to use to speak into our lives.  Ultimately He is the One Who must make Truth alive to us - no matter what instrument He chooses to use.

The end of all things is near. Therefore be alert and of sober mind so that you may pray.

Many people today believe the Second Return of Christ is near.  I do not think it is referring to that.  After all, 2,000 years would not be ‘near’ to the people to whom Peter was originally writing.  I believe it relates to the end of the Old Covenant age, which was finally swept away with the destruction of Jerusalem in AD 70.  Nevertheless, no matter how you understand what the verse is referring to, it cannot mean that everything - as in all items - is destroyed because that would mean that everything - including God - would become non-existent, which is clearly not taught in Scripture.

I hope this article has reinforced for you the importance of not making assumptions about verses but always look for context and compare with the plain teaching of Scripture elsewhere.