Are The Written In Red Words Of Jesus
More Important Than Other Scripture?

The implication of placing supreme importance on the red letter words of Jesus is that the rest of Scripture is less important or "second class." The words of Moses or Paul [and others] as recorded in the Bible suddenly do not seem to be worthy of our attention. We have to focus on the words written in red. So are some parts of Scripture "second class" to the words written in red? What does the Bible itself say.

Jesus IS the Word of God. Jesus is God joining in our humanity. Jesus is the true revelation of God and all we need to know about Him.

The Son is the radiance of God’s glory and the exact representation of his being, sustaining all things by his powerful word... Heb. 1:3

Since Jesus is the Living Word of God, doesn't that make His spoken words written in red in many Bibles as the supreme peak of divine revelation? Why would we study anything else but the red letters?

How did Jesus view the Scriptures? Remember He only had what we call the Old Testament because the New Testament had not yet been written! 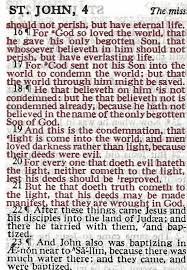 Let's look at what Jesus Himself believed.

“Haven’t you read,” he replied, “that at the beginning the Creator ‘made them male and female,’ and said, ‘For this reason a man will leave his father and mother and be united to his wife, and the two will become one flesh' So they are no longer two, but one. Therefore what God has joined together, let man not separate.” Matt. 19:4-6 [written in red]

Jesus believed in Genesis as an historical account of the beginning of the world and, specifically, the beginning of marriage. He also viewed it as inspired because He used it to support His teaching on marriage and divorce.

And beginning at Moses and all the prophets, he expounded unto them in all the scriptures the things concerning himself. Luke 24:7

Notice that after the resurrection, Jesus did not simply explain with words written in red what had happened. Jesus went to what He accepted as the divinely inspired Old Testament to prove what He was saying. Jesus used the authority of what was written in the Old Testament to establish what He had accomplished. To act as if the Old Testament or other parts of the New Testament are "second class" or unimportant because they have no red letters is to treat them in the opposite way Jesus Himself treated them.

When handling the temptations of Satan at the beginning of His ministry, before He had done any teaching personally, He referred to the entire Old Testament as the Word of God.

Jesus answered, “It is written: ‘Man does not live on bread alone, but on every word that comes from the mouth of God.’ ” Matt. 4:4 [written in red]

Jesus considered the Old Testament as the Word of God from the mouth of God. Since Jesus is the Word of God, He is the ultimate Author of the entire Bible including those parts not written in red. Every word from Genesis to Revelation are the words of Jesus Himself through different human instruments. They are all equally valid, equally inspired and equally the words of Jesus. [Jesus personally did not write down anything.]

Jesus criticized the religious rulers of His day for not taking the entire Word of God seriously. We do not want to fall into the same trap.

"Thus you nullify the word of God by your tradition that you have handed down. And you do many things like that.” Mark 7:13 [written in red]

Paul, writing under the inspiration of Jesus by the Holy Spirit, call the Old Testament "the very words of God."

What advantage, then, is there in being a Jew, or what value is there in circumcision? Much in every way! First of all, they have been entrusted with the very words of God. Rom. 3:1-2

Peter was a direct apostle and close personal friend of Jesus Christ. He was a leader in the church after Jesus had been taken up into heaven. If anyone would value the spoken words of Jesus above other Scriptures it would be him. In writing his own epistle he referred to Paul's writings as divinely inspired Scripture.

And account that the longsuffering of our Lord is salvation; even as our beloved brother Paul also according to the wisdom given unto him hath written unto you; As also in all his epistles, speaking in them of these things; in which are some things hard to be understood, which they that are unlearned and unstable wrest, as they do also the other scriptures, unto their own destruction. 2 Pet. 3:15-16

So the entire Bible is the Word of Jesus Christ and could be written in red. While we may have a special interest in the spoken words of Jesus while He was on earth, it is an error to consider them higher in importance than the words of Jesus in the rest of Scripture.

Notice that even the words written in red are not always exact quotes. For example:

“So when you see standing in the holy place ‘the abomination that causes desolation,' spoken of through the prophet Daniel—let the reader understand—then let those who are in Judea flee to the mountains." Matt. 24:15-16

“When you see Jerusalem being surrounded by armies, you will know that its desolation is near. Then let those who are in Judea flee to the mountains, let those in the city get out, and let those in the country not enter the city." Luke 21:20-21

No matter how you interpret this portion of Scripture, both Matthew and Luke were recording the same speech of Jesus yet it is worded differently. Matthew probably records what Jesus actually said, while Luke, writing to Gentile believers who would have been less familiar with Daniel, gave the meaning of the words of Jesus. That does not make Luke's version any less inspired.