Bible history is a fascinating study.  It can give new light on the understanding of Biblical characters and events by looking at a Bible timeline.  For example, we can see that Adam only died 126 years before Noah was born.  Many people who lived before the flood could have talked with Adam [and possibly Eve although we don’t know her date of death] and heard the story of the Creation and the Fall directly from the source or they could have traveled to confirm what they heard.  In fact, the lives of two people which overlap [Adam and Methuselah] cover the entire time from the Creation to the Flood.  And Noah’s son Shem was still living during the time of Abraham.

“This marvellous chronology has a basis of its own, a plan of its own and a purpose of its own.  Its basis is the Bible itself; its plan is the genealogical or life line that stretches from the first Adam to the last Adam, from the beginning of the old creation to that of the new; and its purpose is to bring those who follow its progress to revelations of vital truth pertaining to God’s mighty work of Redemption, and to spiritual and practical lessons of superlative value.”  Philip Mauro, The Wonders Of Bible Chronology pg. ix

The Bible History on these pages is taken primary from the works of Phillip Mauro and James Ussher.  Many Biblical chronologies which cover the Old Testament timeline begin with secular histories - normally Egyptian or Persian - and try to fit Bible History into that timeline.  This is the opposite of what Christians should be doing.  We understand that the Bible is the inerrant Word of God which means that its chronology is also inerrant.  So when looking at Bible History we should begin with the Word of God and accept it when there appears to be inconsistencies with secular records.  Of course, as with all areas, we should work at being sure we are understanding the Word of God correctly and allow for our own possible errors.

“…the fact is that every chronological system covering the period we have to do with [i.e., from the beginning of Persian monarch down to Christ] is largely a matter of guesswork.  All those systems, without exception, are based on the “canon” of Ptolemy, that is to say, a list of supposed Persian kings, with the supposed length of reign of each, which list was complied by Ptolemy, a heathen astronomer and writer in the second century A.D.  But Ptolemy does not even pretend to have any facts as to the length of the Persian period…  Ptolemy estimates or guesses this period to have been 205 years long.  …every one who has attempted to construct a Bible chronology has based himself on Ptolemy’s estimate.  In a word then, there is no chronology in existence of the period from Cyrus to Christ except in the Bible.”  Phillip Mauro, The Seventy Weeks of Daniel And The Great Tribulation, pg. 22

“…the Bible is absolutely the only available source of information concerning the chronology of the human race prior to the seventh century B.C., when the first vague historical records of existing nations such as Greece, Rome, China, etc., begin…Furthermore we find that, whereas human histories of the great nations of the world have no beginning at all, but emerge gradually from a perfect fog of myths, legends and fables [often absurd and grotesque], the Bible has, from its very first word, a definite historical character, in the greatest possible contrast with all other ancient writings.”  Phillip Mauro, The Wonders Of Bible Chronology, pg. 4 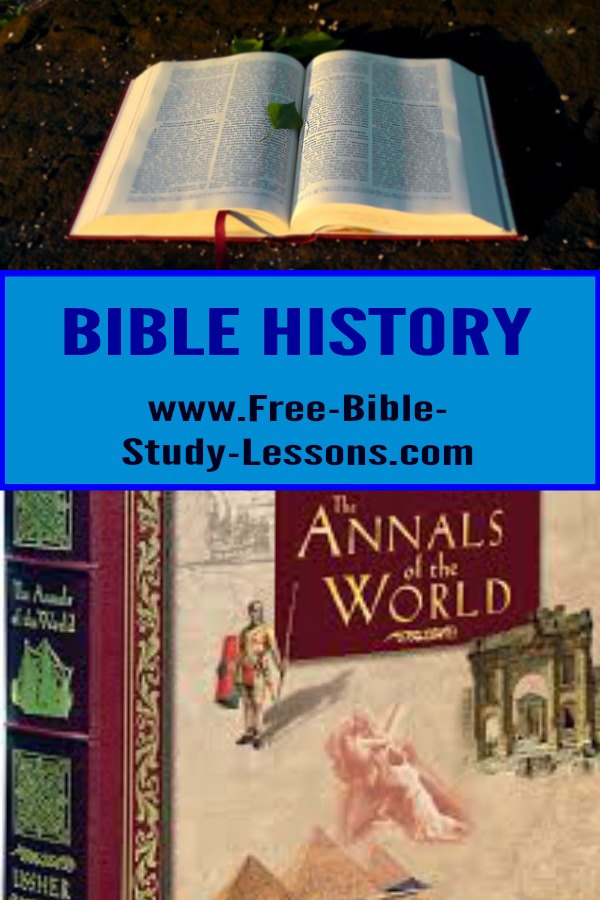 Both Mauro and Ussher take the Word of God as the final authority in Bible history [as in all else].  They do have a slightly different way of doing things, as you can see that Mauro starts at the creation of Adam counting at 0 and Ussher starts at the creation of the world with 1.  At the beginning they are 42 years apart in their calculations which is amazing.  One would have thought, with some of the difficulties in Biblical chronology, there would have been a greater difference over about 4,000 years.

Philip Mauro confines himself to the events in Scripture in which a date can be determined.  He traces an unbroken record from Adam to Christ.  James Ussher has a wider scope.  While he also takes the Bible as authoritative, he draws on outside sources for undated Biblical events and events not mentioned in the Bible.  If you wish to pursue a study on your own I recommended my two main source books: The Wonders Of Bible Chronology by Philip Mauro and The Annals Of The World by James Ussher.

When thinking of ancient events, especially Old Testament timelines we like to think in concrete terms.  We like to be able to say Event A happen in year X.  Many times events developed over periods of time and it is only in looking back that we can see how things happened.  For example, when we say that Greece was founded in 2089 BC we do not mean that the Greek Civilization was suddenly there.  Instead, that is when it was first settled and kings began to rule in the general area which would develop into what we know as the Greek Civilization.

I am in the process of putting together this Bible history timeline [it will always be an ongoing project!] to help myself and you in our study of Biblical people and events.  As you will see, I give both Phillip Mauro’s and James Ussher’s dates for events.  And you will also find some links within the Biblical chronologies that will give you either further insights or footnotes if you are interested.

[Now, I should point out that I am not an expert on Chronology; therefore, if you have an issue with the dates given by Mauro or Ussher I suggest you take it up with them when you get to heaven.  This is an “as is where is” project, although you are welcome to note any differences of view or additions in the comment section at the bottom of each page.]

For ease of use I have broken the Chronologies into different time periods.  You will then be able to easily drop into the time zone you are interested in.

Bible History dates in Green are from Mauro, dates in Blue are from Ussher and dates in Red are from other sources.  There are two dates given with both Mauro and Ussher.  The first date is the number of years since creation and the second date is the BC/AD date.

Article on the reliability of the Genesis Genealogies from Creation Ministries International.

The Divided Kingdom To End Of Old Testament

If you find these pages helpful, share the resource with your friends by sharing this short promotional video.  Help others enhance their own Bible Study.