Difficulties
In The Bible

Some Christians stumble when they run across things in their Bible reading that confuses them, seem illogical, or appear contradictory.  When you come across such passages consider the points below.

Some people are surprised and staggered because there are difficulties in the Bible.  I would be more surprised and more staggered if there were not.  What is the Bible?  It is the revelation of the mind and will and character and being of the infinitely great, perfectly wise, and absolutely holy God.   But to whom is this revelation made?  To men and women like you and me, to finite beings.  To men who are imperfect in intellectual development and consequently in spiritual discernment.  There must, from the very necessities of case, be difficulties in such a revelation made to such persons  When the finite tries to understand the infinite there is bound to be difficulty. 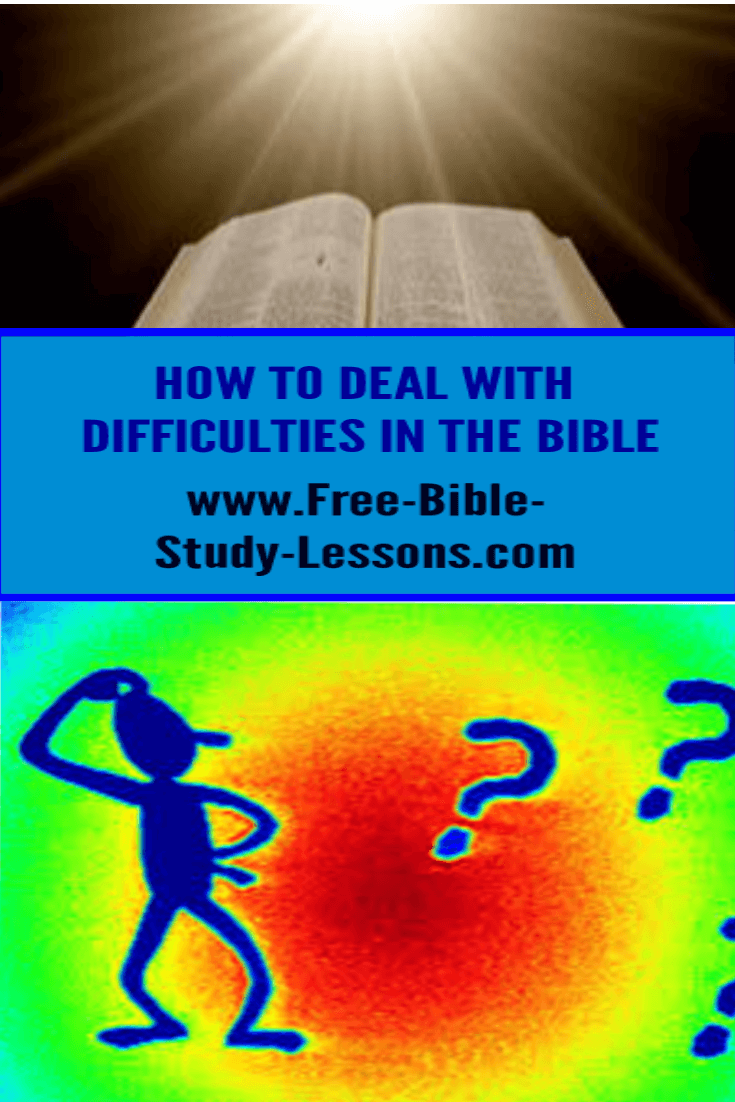 2.  The second thing to be said about these difficulties is that a difficulty in a doctrine, or a grave objection to a doctrine, does not in any wise prove the doctrine to be untrue.

What would we think of a beginner in algebra who, having tried in vain for half and hour to solve a difficult problem, declared that there was no possible solution to the problem because he could find none?

5.  The fifth thing to be said about the difficulties in the Bible is that the seeming defects in the book are exceedingly insignificant when put in comparison with its many and marvelous excellencies.

It certainly reveals great perversity of both mind and heart that men spend so much time expatiating on the insignificant points that they consider defects in the Bible, and pass by absolutely unnoticed the incomparable beauties and wonders that adorn and glorify almost every page.  What would we think of any man, who in studying some great masterpiece of art, concentrated his entire attention upon what looked to him like a fly-speck in the corner.  A large proportion of what is vaunted as "critical study of the Bible" is a laborious and scholarly investigation of supposed fly-specks and an entire neglect of the countless glories of the book.

Take a man who is totally ignorant of the real contents and meaning of the Bible and devotes his whole strength to discovering apparent inconsistencies in it, to such superficial students of the Bible these difficulties seem of immense importance; but to the one who has learned to meditate on the Word of God day and night they have scarce any weight at all.  The mighty man of God, George Muller, who had carefully studied the Bible from beginning to end more than a hundred times, was not disturbed by any difficulties he encountered.  But to the one who is reading it through carefully for the first or second time there are many things that perplex and stagger.

7.  The seventh thing to be said about difficulties in the Bible is that they rapidly disappear upon careful and prayerful study.

Dealing With Difficulties
In The Bible

How shall we deal with the difficulties which we do find in the Bible?

1.  First of all, honestly.  Whenever you find a difficulty in the Bible, frankly acknowledge it.  If you cannot give a good honest explanation, do not attempt to give any at all.

2.  Humbly.  Recognize the limitations of your own mind and knowledge, and do not imagine there is no solution just because you have found none.  There is in all probability a very simple solution.  You will find it some day, though at present you can find no solution at all.

3.  Determinedly.  Make up your mind that you will find the solution if you can by any amount of study and hard thinking.  The difficulties in the Bible are your heavenly Father's challenge to you to set your brains to work.

4.  Fearlessly.  Do not be frightened when you find a difficulty, no matter how unanswerable it appears upon first glance.  Thousands have found such before you.  They were seen hundreds of years ago and still the Old Book stands.  You are not likely to discover any difficulty that was not discovered and probably settled long before you were born, though you do not know just where to lay your hands on the solution.  The Bible which has stood nineteen centuries of rigid examination and incessant and awful assault, is not going under before any discoveries that you make or any attacks of modern infidels.  All modern infidel attacks upon the Bible are simply a revamping of old objections that have been disposed of a hundred times in the past.  These old objections will prove no more effective in their new clothes than they did in the cast-off garments of the past.

5.  Patiently.  Do not be discouraged because you do not solve every problem in a day.  If some difficulty defies your best effort, lay it aside for awhile.  Very likely when you come back to it, it will have disappeared and you will wonder how you were ever perplexed by it.  The writer often has to smile today when he thinks how sorely he was perplexed in the past over questions which are now as clear as day.

6.  Scripturally.  If you find a difficulty in one part of the Bible, look for other Scriptures to throw light upon it and dissolve it.  Nothing explains Scripture like Scripture.  Never let apparently obscure passages of Scripture darken the light that comes from clear passages, rather let the light that comes from the clear passage illuminate the darkness that seems to surround the obscure passage.

7.  Prayerfully.  It is wonderful how difficulties dissolve when one looks at them on his knees.  One great reason who some modern scholars have learned to be destructive critics is because they have forgotten how to pray.