A clergyman walking down a country lane and sees a young farmer struggling to load hay back onto a cart after it had fallen off. "You look hot, my son," said the cleric. "why don't you rest a moment, and I'll give you a hand."

"No thanks," said the young man, "My father wouldn't like it."

"Don't be silly," the minister replied, "Everyone is entitled to a break. Come and have a drink of water."

Again the young man protested that his father would be upset. Losing his patience, the clergyman said, "Your father must be a real slave driver. Tell me where I can find him and I'll give him a piece of my mind!"

"Well," replied the young farmer, "he's under the hay."

Three ministers were sitting around a table. They decided to draw strength from each other by each one sharing his greatest fault.
The first minister confessed, "I have an addiction to gambling and sometimes I dip into the offering plate."
The second minister said, "I admit that I have trouble with lustful thoughts."
The third minister shook his head sadly, "I must tell you, I am a terrible gossip."

A minister delivered a sermon in half an hour one Sunday morning that was about half the usual length of his sermons.
He explained, "I regret to inform you that my dog, who is very fond of eating paper, ate that portion of my sermon which I was unable to deliver this morning."
After the service, a visitor from another church shook hands with the preacher as he was leaving, and said,   "Sir, if that dog of yours has any pups, I sure would like to get one to give to my minister!"

You Know Your Church Is Redneck If...

The choir is known as the "OK Chorale."

High notes on the organ set the dogs outside to howling.

The baptismal pool is a #2 galvanized washtub.

The collection plates are really hub caps from a '56 Chevy.

Instead of a bell, you are called to service by an elk call.

The finance committee refuses to provide funds for the purchase of a chandelier because none of the members knows how to play one.

When they learned that Jesus fed 5000 people with two fish, folks asked what kind of bait was used to catch 'em.

A member of the church requests to be buried in the 4-wheel-drive truck because "It ain't never been in a hole it couldn't get out of."

The choir robes were donated by [and embroidered with the logo from] Billy Bob's Barbecue.

People think "rapture" is what you get when you lift something too heavy.

Opening day of moose season is recognized as an official church holiday.

The minister and his wife drive matching pickup trucks. 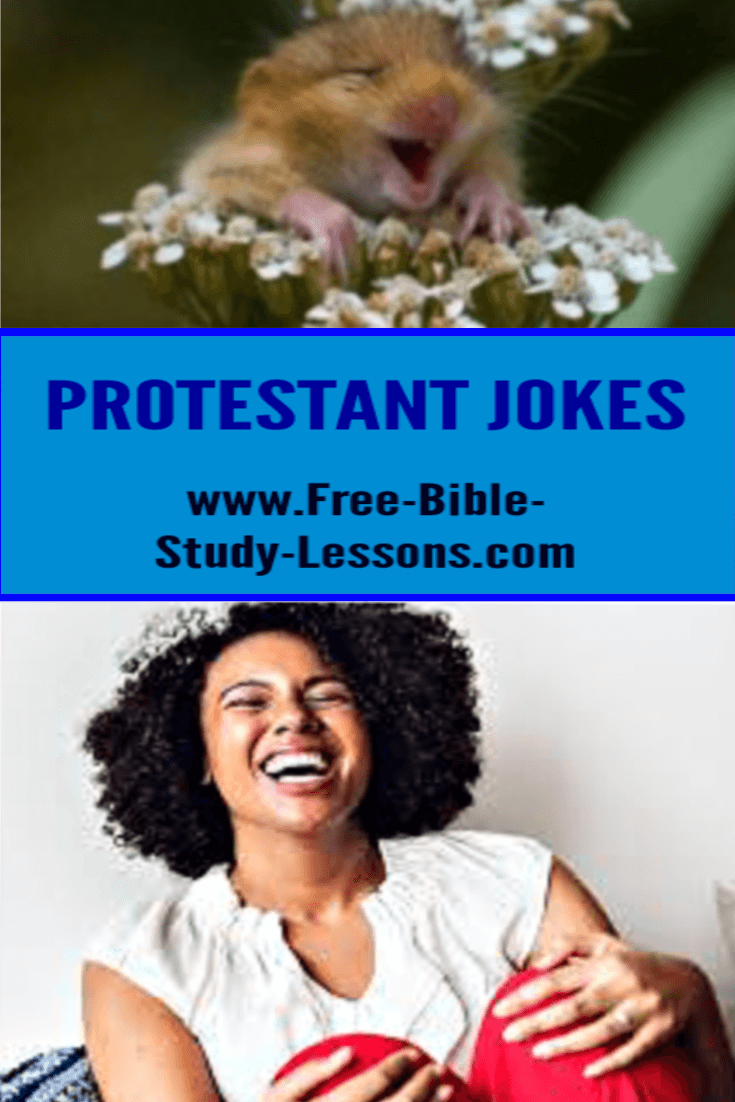 A man attended a revival meeting at a local church. During the testimony time many people got up and testified along the lines of "The devil has been after me all week, but I got the victory."

In the middle of the meeting the man decided to slip out. As he was going down the front steps he was surprised to see the devil sitting on the steps crying.

"What are you crying?" he asked.

Between his sobs the devil responded, "Those people are accusing me of things I'm not guilty of!"

A minister was preoccupied with thoughts of how he was going to ask the congregation to come up with more money than they were expecting for repairs to the church building.   Therefore, he talked with the organist to see what kind of inspirational music she could play after the announcement about the finances to get the congregation in a giving mood.

During the service, the minister paused and said, "Brothers and Sisters, we are in great difficulty; the roof repairs cost twice as much as we expected, and we need $4,000 more. Any of you who can pledge $100 or more, please stand up."

Just at that moment, the organist started playing the National Anthem.

A pastor was looking for ways to increase the finances for the church building program. He came up with the idea of wiring random chairs in the auditorium to an electric charge. He hooked up three different sets of chairs to three buttons on the pulpit.

The next Sunday morning, during the announcements, he said,"We need to raise some money for our building program. Who would like to give $10.00?"

He pressed the first button. Ten people shot to their feet.

He pressed the next button. Ten more people jumped up.

He pressed the third button. Ten deacons were electrocuted.

A local church was hosting a community choir sing. One of the lady's choirs was led by a respected conductor named Harry Butts. When it getting close to their turn, the announcer said, "Will all the women with Harry Butts come forward."

Two days later the devil called up St. Peter, "Haven't you got those mansions ready yet!" he demanded.

"It's an uproar down here. Billy Graham is saving souls, Oral Roberts is healing the sick and Robert Schuller...he's raising money to air condition the place!"

Minister at funeral service: "Friends, in this coffin is the body of our beloved departed one. It is only the shell, the nut has gone."

The minister of a large church asked the secretary to put his topic on the bulletin board so that everyone could see what his next Sunday's sermon would be. He said, "My topic is 'Are Ministers Cracking Up?'"
The secretary put up the following announcement: Our Minister Is Cracking Up.

The new minister stood at the church door greeting the members as they left Sunday morning service. Most of the people were very generous in telling the new minister how they liked the message, except for one man who said, "That was a very dull and boring sermon, pastor."
In a few minutes the same man appeared again in the line and said, "I didn't think you did any preparation for your message, pastor."
Once again, the man appeared, this time muttering, "You really blew it. You didn't have a thing to say, pastor."
Finally the minister could stand it no longer. He went over to one of the deacons and inquired about the man.
"Oh, don't let that guy bother you," said the deacon. "He is a little slow. All he does is go around repeating whatever he hears other people saying."

After a funeral service a minister posted this notice on the church bulletin board: Brother Baker Departed For Heaven At 3:30 A.M.
The next day he found the following written below his announcement: Heaven, 8:00 P.M. - Brother Baker has not yet arrived. Great Anxiety.

A preacher spoke 20 minutes on Isaiah, 20 minutes on Ezekiel, 20 minutes on Jeremiah, and 20 minutes on Daniel. Then he said, "We now come to the 12 minor prophets. What place will I give Hosea?"
A man in the back of the church said, "I'm leaving. Give Hosea my place."

A church is a place to go to met nodding acquaintances.

A visiting pastor at a country church asked one of the farmers if he could use his barn to get away where it was quiet and study for his message. After several hours of study, the pastor left the barn for a walk. When he came back he discovered that the cow had eaten all of his sermon notes. The next day the farmer complained to the pastor that his cow had gone dry.

One sunny Sunday a minister decided to skip church so he could play golf.  Arch-Angels Michael and Gabriel where watching from heaven.

As the minister got to the 10th hole Gabriel commented, "This is terrible skipping church to play golf. He should be setting a better example."

The minister drove the ball off the par 4 hole.  It soared through the air, landed on the green and rolled into the hole for a perfect hole-in-one.  The minister was jumping up and down in excitement.

Gabriel said, "I thought you were punishing him!  That's the best shot he's ever made."

Michael winked, "Who is he going to tell?"

A misprint in the church bulletin the Sunday before Christmas read: "Our adult choir will sing, 'I Heard The Bills On Christmas Day.'"