There are many different types of courage or perhaps it would be better to say that different situations call for different expressions of courage.  To begin with courage does not mean acting without fear, but often acting and doing the right thing in spite of fear.  Cowardice is giving in to fear, courage is taking just one more step…

Rahab was in a difficult position.  Through the grace of God she had come to a saving knowledge of God.  She had placed her faith in Him.  She most likely had already made changes in her lifestyle.  A.W.Pink points out that the fact she had laid out stalks of flax on her roof [Joshua 2:6] shows that she was now doing honest work for a living like the virtuous woman [Pr. 31:13].  The change in her heart had produced a change in her life although the title Rahab The Harlot still clung to her.

Nevertheless she had to be careful.  Not only was she living in an ungodly society, but also it was a society that was at war with the people she desired to join.  Her actions, from their perspective, were traitorous.  If it was discovered where her true loyalties lay, she would be executed.  Undercover courage for her wasn’t a cowardly convenience, it was a matter of life and death.  Her actions, with the spies, showed that, if discovered, she would not have betrayed her new God.  Her survival demanded silence, yet she must have carefully shared some of her commitment with her family for when the time came they were willing to accept her protection. 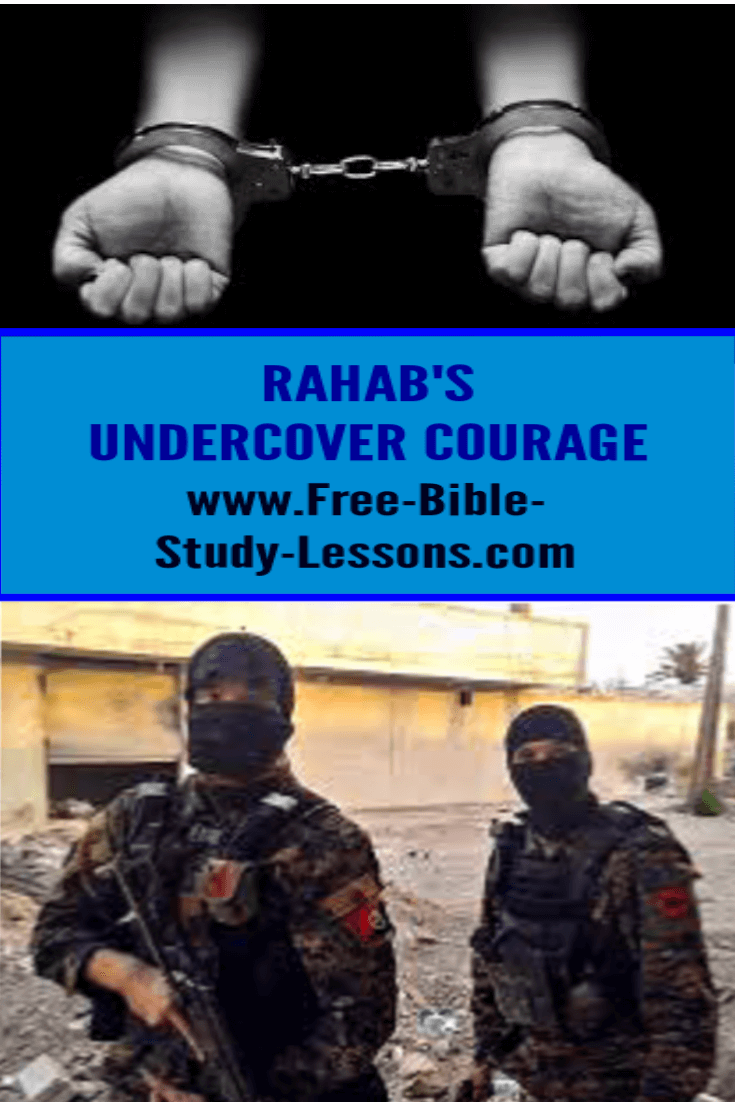 This was living under pressure, constant pressure.  Walking through her city daily as if everything was same.  Talking with old friends and acquaintances without slipping up.  Keep up appearances without exposing or betraying her faith.  Wondering if every glance from a friend or a stranger was a sign she had been found out.  How long had she kept this up?  Days?  Weeks?  Years?  We don’t know.

What we do know is that she was not afraid to risk it all when the situation demanded it.  She would not look the other way when she was needed.  She would risk exposure and death to save the lives of the spies.  This undercover courage was kept for the day when it was needed.  This was courage that could look the soldiers who came knocking at her door right in the eye and convince them that the spies had already escaped out of the city.  It was not something the faint-hearted or fearful could do.

Throughout history and in many parts of the world today, Christians have and do live under this kind of extreme pressure.  They have to be careful what they say and how they say it.  Their lives and the lives of others may depend on it.  These Christians are not cowards.  They are using undercover courage to expand the Kingdom of God.  Often they risk their lives to meet together, to share with those who appear interested, to smuggle Bibles and other Christian literature.  If caught they do not deny their faith, but face torture and death with the strength of Christ.  These, like Rahab, are the front line soldiers in the fight of faith against evil.  They are placed in these situations by evil men and governments intent on destroying Christianity, but they are not giving in.  They have to act wisely and with discretion.

We can be tempted from our comfortable couches to criticize their actions or methods.  We can be hard, legalistic and discouraging, weakening their hands instead of strengthening them.  They need our support and our prayers.  Let us remember that Rahab is twice commended in the New Testament and honoured with a place in the line of Christ and never once criticized by God or the writers of the Bible [although many others have dared to trod there].