The Bible does not directly answer our question, What Did Jesus Look Like?, but it does give us clues from which we can get a good general picture.  Although we can be curious as to the physical appearance of Jesus, it is obviously not something of great importance otherwise the Word of God would give us a detailed description.  Worldly people often place great value on outward appearance, but God places value on the heart and character.

Your beauty should not come from outward adornment, such as elaborate hairstyles and the wearing of gold jewelry or fine clothes.  Rather, it should be that of your inner self, the unfading beauty of a gentle and quiet spirit, which is of great worth in God’s sight. 1 Peter 3 :4-5, NIV

Nevertheless, let’s see what we can discover about what Jesus looked like.  Some of what is below is solid deduction and some is conjecture.  You can decide for yourself how much is valid. 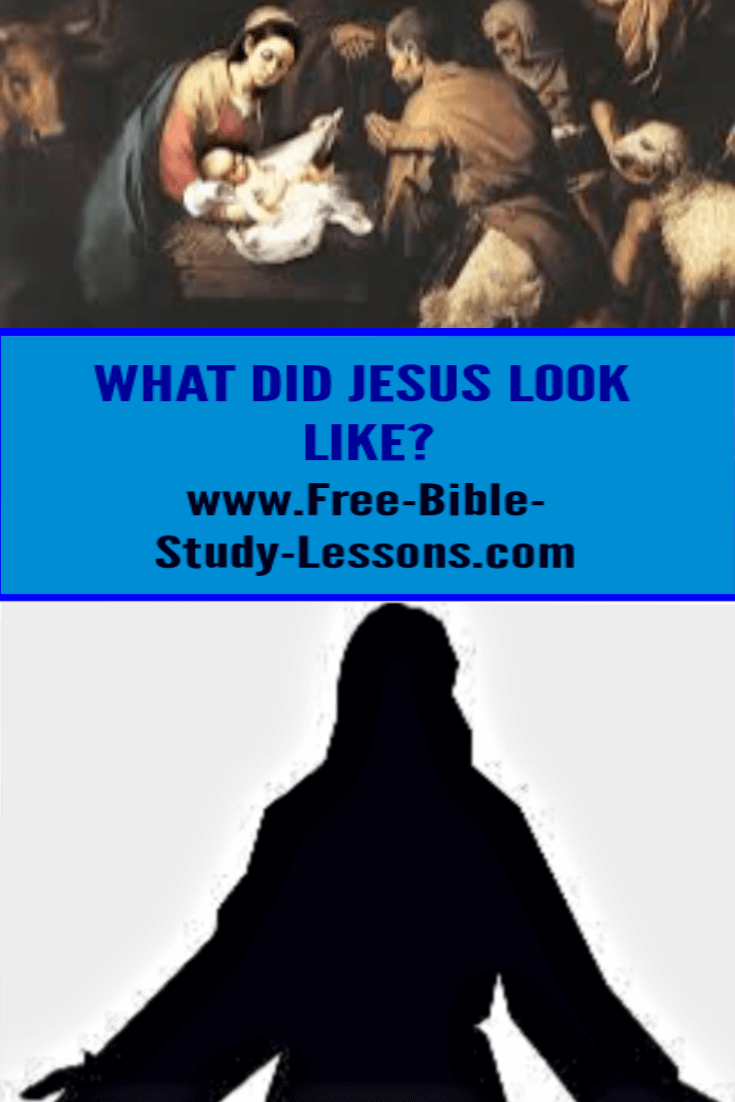 As we think about what did Jesus look like we need to realize that He looked like an average person.  He was not especially handsome or attractive, Isaiah tells us.  We need to picture an average-looking man from the Middle East.

He had no beauty or majesty to attract us to him, nothing in his appearance that we should desire him.  Is. 53:2, NIV

We know Jesus was born a Jew in Judea.  This means that He had brown skin like most everyone born in the Middle East.  He also had dark hair and brown eyes - like His mother, Mary.  The average height and weight of a Jew living in the 1st Century was 5’ 1” and 110 lbs.  [Source: jeremyacarr.blogspot.com].  Since Jesus was a normal-looking man at the time we can assume He was around the “average.”

So Joseph also went up from the town of Nazareth in Galilee to Judea, to Bethlehem the town of David, because he belonged to the house and line of David.  He went there to register with Mary, who was pledged to be married to him and was expecting a child.  Luke 2:4-5, NIV

We also know that Jesus had a beard that was long enough for His torturers to grab ahold of and pull out during the crucifixion.

It is very likely that Jesus had short hair.  The apostle Paul makes a passing remark about long hair being a woman’s glory and a man’s shame.  It is highly unlikely he would have made such a comment if Jesus had had long hair.  In fact, most art work depicting Jesus before the 10th Century have Him with short wool-like hair.  It was after the 15th Century that the long hair idea became more popular.  [Source: Quora.com]

Long hair was part of the Nazirite vow [Num. 6:1-21] and some feel because Jesus was called a Nazarene that He had taken this vow and thus had long hair.  The Nazirite was not normally a life-long vow, but, in any case, Jesus broke other parts of the Nazirite Vow [such as drinking wine] which He could not have done had He taken the vow.  Scripture is plain that Jesus was called a Nazarene because He came from Nazareth not because of a vow.

…and came and lived in a city called Nazareth. This was to fulfill what was spoken through the prophets: “He shall be called a Nazarene.  Matt. 2:23, NASB

One other point that we can gather from Scripture is that Jesus was muscular.  I get this from the fact He was a carpenter.  This was a manual job which would have required strength to perform.

Is not this the carpenter, the son of Mary, and brother of James and Joses and Judas and Simon? Are not His sisters here with us?” And they took offense at Him.  Mark 6:3, NASB

Sorry to disappoint some, but Jesus was not a blue-eyed caucasian - and neither was Mary!  If the above image of Jesus makes you uncomfortable or turns you off then examine your heart to see if some form of racism is lurking there.

[By the way, Adam, Eve and vast majority of people in Scripture would have these general characteristics.  This idea was so offensive to a Nazi called Walter Grundmann that he attempted to rewrite the New Testament removing all positive references to Judaism.  Although Hitler was aware of the project, he and most of the Nazi’s viewed any form of Christianity with suspicion, hatred and contempt and so did not officially sponsor the project.]

The only things we know about what Jesus wore from Scriptures is that He wore sandals and had an outer garment that could easily be divided into four pieces and tunic [worn next to the skin] that was woven in a single seamless piece.

And he was preaching, and saying, “After me One is coming who is mightier than I, and I am not fit to stoop down and untie the thong of His sandals.   Mark 1:7, NASB

Then the soldiers, when they had crucified Jesus, took His outer garments and made four parts, a part to every soldier and also the tunic; now the tunic was seamless, woven in one piece.  John 19:23, NASB

It is difficult to know details of what kinds of clothes were worn because clothes decay quickly [unlike bones and pottery] so archaeology is not a lot of help.  Also, unlike other ancient cultures, Jews did not often draw images of human beings so the art work of the times is not very helpful either.  From what we do know, the clothes would likely be either wool or linen and home made.  Often a belt was worn so that the long flowing robe could be tucked into it make walking and working easier.  Whatever Jesus wore, it would have fitted in with the average wear of a poor man of the time. [Source: ads.org.]

So, if Jesus was so average, what made Him stand out and draw people to Him?

It was His character.  He was a safe person to be with.  Children loved Him and He loved children.  Women could feel safe and accepted in His presence.  He broke tradition and treated them with respect and as equals.  He cared about their feelings and troubles.  They did not have to worry about lustful side glances when they were around Him.  Men and women could share freely with Him and not receive condemnation.  They could indeed experience the love and acceptance of God.

Read through the Gospels and look at how Jesus dwelt with people.  He could be strong and tough to those who opposed Him and hurt others.  He was also gentle and kind to all who came to Him.  You can know this Jesus for yourself!

If you are a Christian, Jesus is living in your skin - regardless of your skin colour, gender or appearance.  How well are you and I reflecting the truly important characteristics of Jesus?