Rebekah was a very beautiful, lively young lady.  One of her family chores was going to the spring outside of town and bringing water back for the family.  It was not a pleasant duty in a dry, dusty country, but she did it cheerfully.  One evening when she went to the spring she saw a traveller sitting there.  He was an older man and had obviously come a long way.  As Rebekah drew water from the spring, the man approached her and asked for a drink.  Quickly she complied.  Then she cast her eye behind him and saw his ten thirsty camels - each of which could drink up to 30 gallons of water.  Without hesitation she offered to draw the water for all his camels as well.

Little did Rebekah know that this man was a servant of her uncle Abraham who had been sent to look for a wife for Abraham’s son, Isaac.  Nor did she know that this man had prayed and asked God to let the young lady God has chosen for Isaac to offer, of her own free will, to provide water for him and all his camels.  Her act of kind service was going to change her life and give her a place forever in God’s own Word.

As soon as she was finished the man surprised her by giving her a gold nose ring [weighing about 1/5 of a ounce] and two gold bracelets [weighing about 4 ounces].  In today’s prices it was almost a $5,000 present!  After finding out that she was indeed a relative of Abraham, the man asked if there was a place to stay at her home.  She replied that there was, but was so excited that she ran home leaving him at the spring.

Rebekah had a brother named Laban who was a schemer.  As soon as he saw the gold bracelets on his sister’s arms and heard her story he figured there must be something in it for him.  He ran out to the spring and brought Abraham’s servant and his camels back.

Before accepting their hospitality, Abraham’s servant insisted on telling his story to Rebekah’s father and brother.  His explained his mission, the sign he had asked God for and how she had fulfilled them.  After receiving a favourable response the servant brought out many rich gifts for everyone.  Laban was not disappointed!  The only drawback was that the servant wanted to leave the next morning and the family wanted a delay of ten days to say goodbye.  The final choice was given to Rebekah and she decided to leave for her new adventure and new life immediately.  And so she became Isaac’s wife.

This historical story is also a picture of how God sends His preachers, empowered by the Holy Spirit, to woo a wife in a strange country for His Son.

For 19 years Rebekah was childless experiencing the same humiliation and ridicule that Sarah had experienced.  Then Isaac went before the Lord and prayed for her, and she got pregnant.

Rebekah’s pregnancy, when she was probably close to or in her 40’s, was not an easy one.  Something seem to be wrong so she went to the Lord and asked what was happening.  The Lord revealed to her that she was having twin sons and even in the womb they seemed to be fighting each other.  She was told that each son would form a nation, but that the older son would serve the younger one.

Unfortunately, as the boys grew, each parent developed a favourite.  The oldest, Esau, became a skilful hunter and Isaac loved eating wild game.  The younger one, Jacob, was more of a gentle, stay-at-home type and became Rebekah’s favourite.

Sometime, after the boys were born, there was a famine in the land and Isaac moved the family temporarily to the land of the Philistines.  There he followed the example of his father Abraham.  To protect his own life, he told anyone who asked that Rebekah was his sister.  In Abraham’s case it had been a half-lie, but in Isaac’s case it was totally untrue.  The lie was exposed when one day the king of the Philistines happened to see Isaac and Rebekah in what was obviously more than a brother/sister relationship!  Isaac was rebuked and Rebekah was given the protection a wife should have. 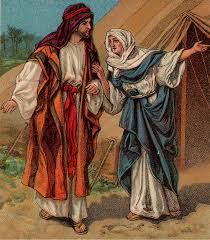 Family troubles did not stop there.  Esau went and married two wives from a foreign nation.  We are not told exactly what the problem was, but they were a “grief” to Isaac and Rebekah.  In-law troubles are nothing new!

One day, when Isaac thought he was nearing the end of his life, he called Esau and told him he was going to pass on the Family Blessing to him after he hunted wild game and prepared Isaac’s favourite meal.  The Family Blessing was not just words, but it was the “passing of the torch” from one generation to the next along with all the promises and blessings given by God.  The person receiving the Blessing would become the next head of the family.  Traditionally, this was to go to the eldest son.  But Isaac and Rebekah both knew that God had promised it to Jacob, not Esau.  However, because Esau was Isaac’s favourite, Isaac was intent on giving Esau the Blessing.

Rebekah overhead this plan.  She must have had some of her brother Laban’s scheming nature because she hatched a plan to get the Blessing for Jacob.  At first Jacob was hesitant, not because he didn’t want the Blessing, but because he was afraid of being caught.  Rebekah had an answer for everything: Isaac was blind so he couldn’t see who it was, Jacob would wear Esau’s clothes so he would smell the same, Jacob would put goat skins on his neck and hands so he would feel hairy like Esau, etc.  So Jacob went along with it and the deception went off perfectly.

No sooner had Jacob left Isaac’s tent, then Esau returned and began preparing the food for his father.  Esau was furious when he discovered what had happened and talked of killing Jacob as soon as their father died.  Rebekah, using Esau’s irritating wives as an excuse, convinced Isaac to send Jacob back to her family to find a good wife.  Issac agreed.  He sent Jacob away with a blessing, this time willingly.

Rebekah thought Jacob would be away for a couple of years until Esau cooled down and then return.  It was to be 20 years before he returned and she died before then - although Isaac, who had thought he was dying, was still alive.  Rebekah never saw her favourite son again.

Heart Of A Servant