Sin Of Others Hurts Us

"And the men of Ai struck down about thirty-six men, for they chased them...therefore the hearts of people melted and became like water. Then Joshua tore his clothes, and fell to the earth on his face before the ark of the Lord..."O Lord, what shall I say when Israel turns its back before its enemies?"...So the Lord said to Joshua: "Get up! Why do you lie thus on your face? Israel has sinned, and they have also transgressed My covenant..." [Joshua 7:5-11, NKJV]

Why do we [as individuals or as a church or as a nation] fail to possess our land - the inheritance God has for us? There can be many reasons, one of which is the timing of God, another major one is sin. Problems are not always the sign of sin [sometimes they are a reward!], but as we see here sin can be the cause of our problems. 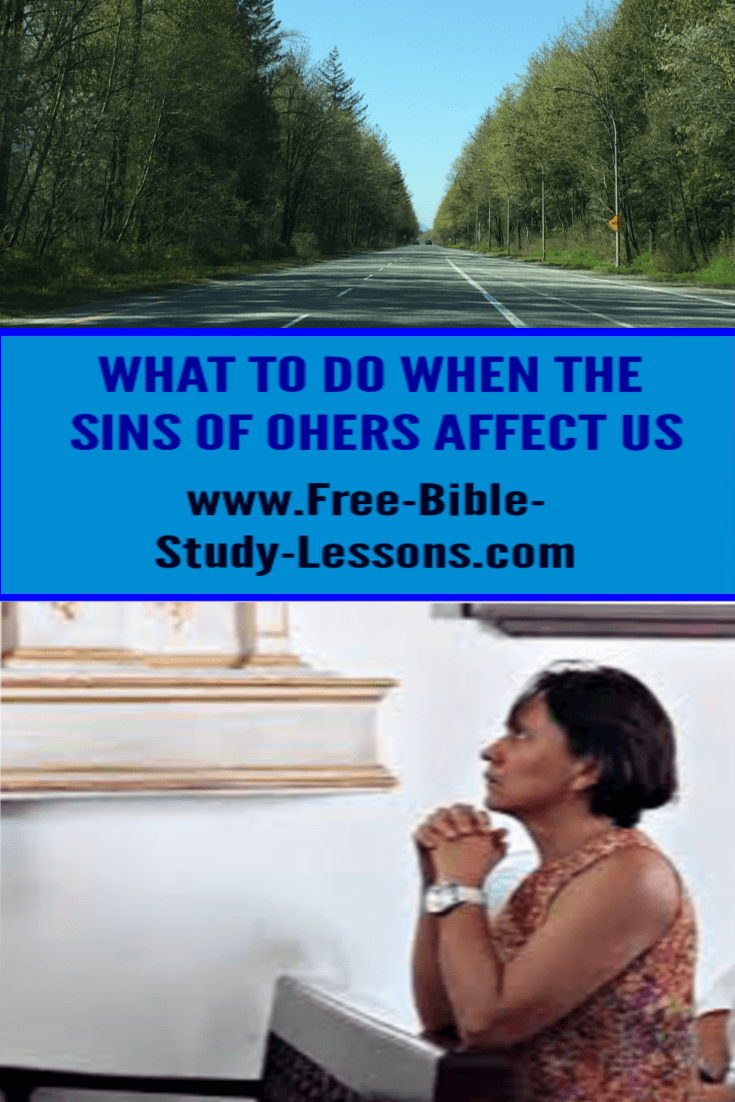 Sometimes it is not even our sin! These thirty-six men died, and their families were left husbandless and fatherless, because of another man's sin. We never sin alone, our sin affects others even if we don't see it and the sin of others can have an impact on us. The sin of doubt and fear of 10 men turned an entire nation, with the exceptions of Joshua, Caleb, and Moses, against the purpose of God and caused them to wander in the wilderness until another generation arose who would have faith. I'm sure you noticed that these faithless men also delayed Joshua and Caleb from entering the promised land for 40 years.

This may seem unfair, but let's look at it.

Second, sin is an ugly thing. Sometimes we think it isn't so bad. Nobody's getting hurt. Nobody knows, etc. Sin will always affect those around us whether we see the immediate connection or not. I'm sure Achan thought his sin would go unnoticed and not impact anyone else...but thirty-six innocent men died and fear came upon an entire nation! Never think that your sin or my sin is a personal matter. God has related us together and our sin effects others.

Third, Joshua went before God in tears [prayer] to discover what was wrong. God basically told him to quit whining and deal with the problem. Men and women of integrity who want to possess their land will not will spend a lot of time [or any time] in condemnation or regret for the past, but neither will they ignore it. The past affects the future. If it is sin, it must be dwelt with and then we move on whether it is our sin or the sin of others. When we sin we need to run to God immediately with repentance and receive His forgiveness. We are not to be condemned, but we are to forsake our sin and move on it God. We are also follow the Biblical standards for repairing, as much as possible, the damage we have done. If it is the sin of others then we need to encourage them to repent, sometimes - as in this case of sin which affected a nation - it involves exposing the wrong doer. Achan was unwilling to repent and forced the issue until it could no longer be hidden.

Final note: If Joshua had consulted God BEFORE going into battle the sin would have been revealed and the men would not have lost their lives. No city [or problem] is too small to get counsel from God before tackling. We may not see the entire picture, but God does. God knows the sin of others as well as our own.