Can your God do everything?  There are three things God cannot do... for which we should be very grateful.

We often think of what God can do and we believe that nothing is impossible for God.  That is true in its context, but there are three things God cannot do.  These are general categories and could be broken down into more specifics. 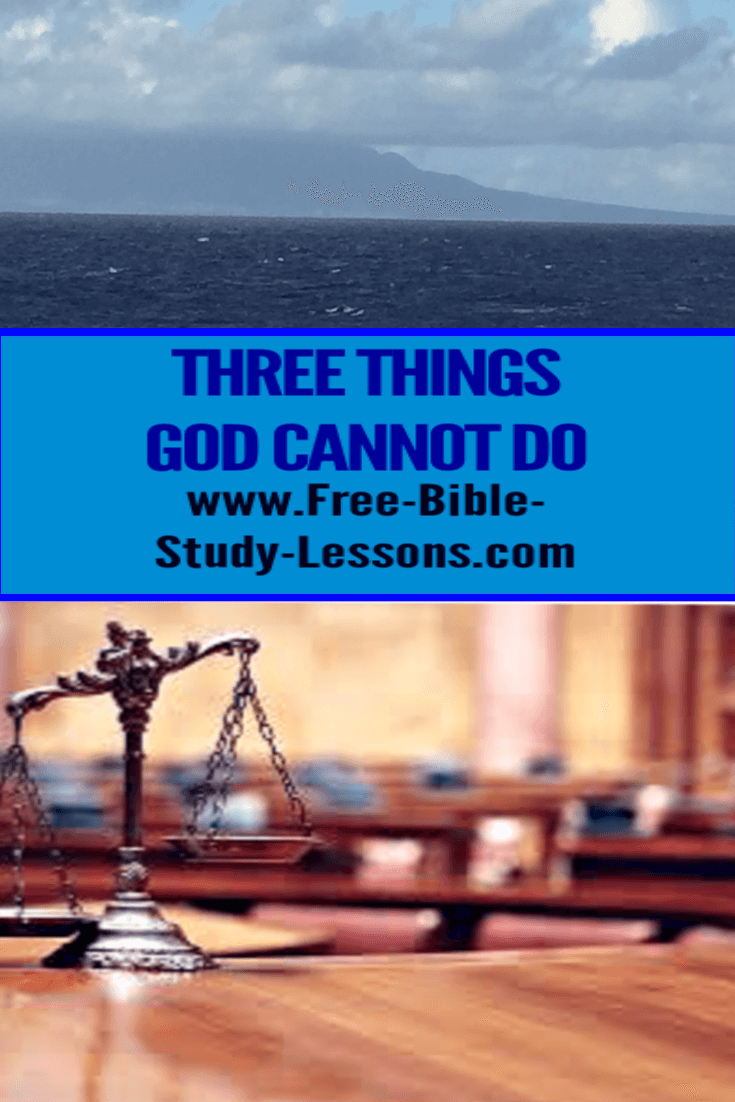 The first of the things God cannot do is violate His own character and nature.  God is holy [Is. 6:3, 57:15]  For God to be holy means that He is perfect and without any sin.  He is the standard by which all else is judged.  If there was a standard higher than God by which God could be judged then there would be someone higher or greater than God.  This was the mistake Eve made.  She thought she could be the standard to judge between what was good and evil.  In so doing, she placed herself above God.  This is the position the humanists are in when they charge God with wrong-doing.  They are, in fact, making themselves gods and claimed to be greater than the real God.  Even Christians sometimes fall into this trap when they begin to doubt the goodness or wisdom of God when hurtful things happen to them or their loved ones.

The holiness of God, in a practical way, means that God cannot sin, i.e. He can never do wrong.  For example, God cannot lie [Num. 23:19].   You could expand this to cover any sin - God cannot cheat, God cannot steal, God cannot be cruel, etc. but you get the idea.

Food For Thought:  If it were possible for God to violate His nature or character then He would no longer be God.  If He were not God, He would not exist.  If God ceased to exist, then everything He made and maintains [Acts 17:24] - which is everything! - would also cease to exist.

The second of the things God cannot do is allow sin to be unpunished.  Sin is a violation of the Person of God.  When we experience a violation of our person or property, know someone who has experienced it or read of the horrible things human beings to do one another, we feel a righteous anger.  Something is not right.  Someone has been hurt, their freedom has been violated.  Our heart cries out for justice, for the perpetrators to be punished and the victim restored.  It angers us when the humanist court systems simply gives a “slap on the wrist” or even fails to prosecute.  Those feelings of righteous anger and the desire for justice are a dim reflection of God’s image in us.  God feels it in perfect clarity.

All of us are born with a sin nature and commit various sins to which we become callous.  We no longer feel them, and, probably, don’t even think of them.  But God does not have a sin nature.  He is not callous to any sin.  Every sin causes Him pain and is a violation of His very being whether it is a juicy piece of gossip or a murder.  We cannot even begin to imagine the depth of pain and horror that God feels everyday at all levels of sinful activities of human beings.

Because God is perfect in His nature, He must be perfectly just.  He cannot allow injustice to go unpunished.  Every sin - no matter how small - is first a violation of God and often, secondarily, a violation of someone or something else.  Justice must be served.  God cannot allow it to be otherwise.

Hell represents the perfect justice of God.  It was not originally designed for human beings, but for the angels who rebelled against God [Jude 1:6].  When Adam joined with them in their war against God, it became the destination of rebellious human beings as well [that’s all of us!].  In perfect justice God must sentence every rebellious angel and every human being to hell.  We have no defence, for we are guilty and deserve it.

The third of the things God cannot do is judge forgiven sin.  When we come to Jesus Christ as Lord and Saviour one of the things that happens is that God makes a legal transaction [Col. 2:13-14].  He takes all of our sin - past, present, future - and puts it on the account of Jesus Christ.  Then He takes all of the righteousness of Jesus Christ and puts it on our account.  When Jesus went to the cross, He paid the penalty for all of those sins.  The justice of God was satisfied.  He cannot double collect, that would be unjust.

For example, let’s say Jim stole $5 from Bob.  Larry pays Bob back the $5 on behalf of Jim.  It would then be unjust of Bob to try and collect another $5 from Jim because the debt is already paid.  Now, if Jim refuses to allow Larry to pay his debt, then Jim is still liable for it.

Jesus Christ paid the sin debt on our behalf; however, we must accept His payment on our behalf [by accepting Jesus as BOTH Lord and Saviour].  If we do not do that, then we are liable to pay the sin debt ourselves.  Because our offence is primarily against the Eternal God, to be just our punishment must also be eternal.  Therefore, anyone who does not accept that the Eternal Son of God paid the price on their behalf, will be paying it themselves forever in hell.  Once a person is locked into hell upon physical death, there can be no escape, no end and no change [i.e. second chance].  This is one reason why it is absolutely vital to accept Jesus as Lord and Saviour now before death.  St. Peter is not going to call your name for some reason you cannot explain.  It is either Jesus Christ or nothing.

“I, even I, am he who blots out your transgressions, for my own sake, and remembers your sins no more. Is. 43:25, NIV

Some people think that when they are forgiven that means that their sins are erased from God’s memory.  That is technically not correct, otherwise God would not be omniscient.  The word “remembers” in the above verse is the same word as when God “remembered” His covenant.  It does not mean that God forgot about His covenant and then suddenly remembered it.  It means that He brought it to mind because it was time to do something about it.  In the same way, the above verse does not mean that God has no conscious memory of what happened, but that He will no longer bring our sins up to deal with because they have been dwelt with at the cross.  Our sins are no longer held against us, we are free to move on in Christ.

We should rejoice that there are three things that God cannot do.  If God could violate His own nature then He could be kind one moment and cruel the next.  We would not be able to depend on His faithfulness or trust in His Word.  Life would be meaningless and hopeless.  If God allowed sin to go unpunished then injustice would reign for all eternity.  Victims who have not received justice in this world would have no hope of seeing justice in the next one.  And we could not trust a God who ultimately would allow evil to win.  If God were to keep bringing up sins that have been forgiven then we would constantly be living in guilt, fear and shame unable to move forward and build the new life that Christ has for us.  Thank God there are things He cannot do!