This may sound like a foolish question; however, there are some sincere Christians today who really feel that our modern humanistic laws are better than the laws God gave Moses, known as the Mosaic Law.  They often arrive at this conclusion because they view the Mosaic Law Covenant as a covenant God reluctantly gave the Israelites after the original covenant He offered them was rejected.  The Law of God, they maintain, does not reflect God’s heart, but was more or less forced on Him by man’s hardness of heart until the New Covenant came. 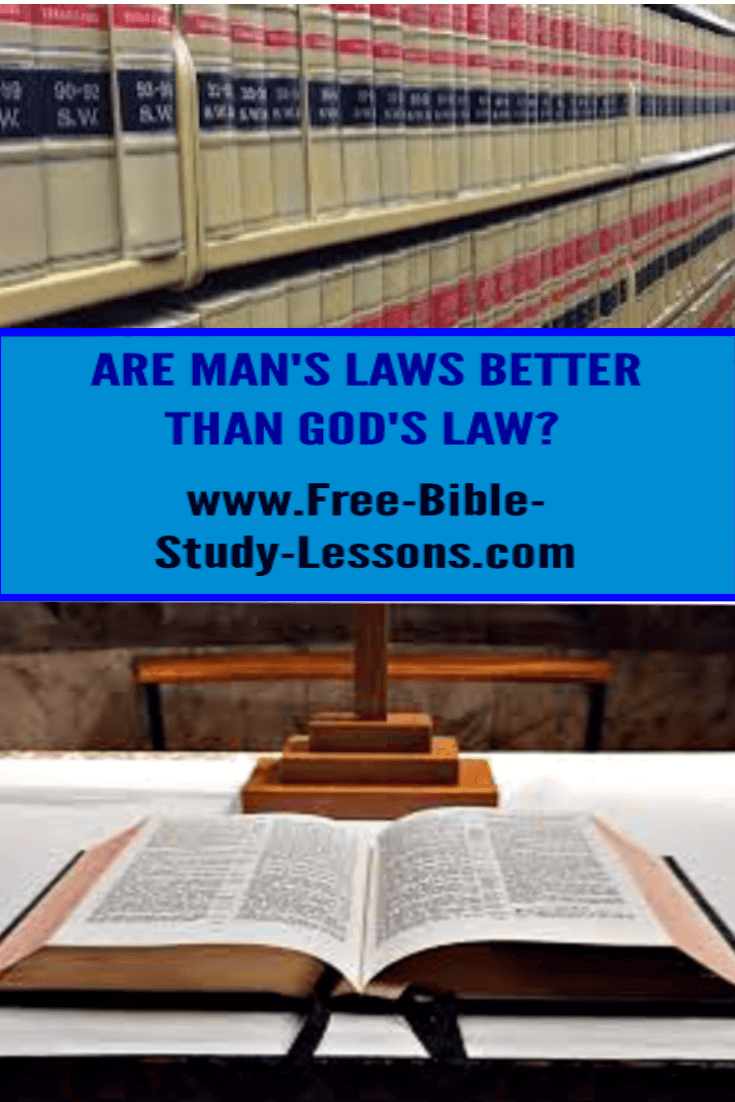 Like humanists, they look at some of the laws contained in the first five books of the Bible and see some of them as harsh, unreasonable and even foolish by today’s standards.  Laws, for example, on slavery, how to treat women and what to eat or not eat are held up to scorn.  Our current laws, they feel are far superior.  [Never mind that sex slavery runs rampant in today’s society in spite of modern laws.]  They justify God giving these laws by saying that because Israel rejected God’s original covenant, He gave them the Mosaic Law which fit their culture and society.  It was superior to the laws of other cultures of that era, but not up to today’s advanced society and culture.

Are they right?  Is man’s modern law superior to the Law God gave the Israelites through Moses?  What does the Bible itself say about Mosaic Law?

Only be strong and very courageous; be careful to do according to all the law which Moses My servant commanded you; do not turn from it to the right or to the left, so that you may have success wherever you go.  This book of the law shall not depart from your mouth, but you shall meditate on it day and night, so that you may be careful to do according to all that is written in it; for then you will make your way prosperous, and then you will have success.  Joshua 1:7-8, NASB

Joshua was told to continually meditate on the Book of the Law as that was where he would get the wisdom he needed to be successful in fulfilling the will of God for his life.

The law of the Lord is perfect, restoring the soul;

The testimony of the Lord is sure, making wise the simple.

The precepts of the Lord are right, rejoicing the heart;

The commandment of the Lord is pure, enlightening the eyes.

The fear of the Lord is clean, enduring forever;

The judgments of the Lord are true; they are righteous altogether.

They are more desirable than gold, yes, than much fine gold;

Sweeter also than honey and the drippings of the honeycomb. Ps. 19:7-10, NASB

David saw great value in the law/commandments/judgments of the Lord.  He valued them more than gold.  The word “perfect” means “complete, whole, entire, sound, wholesome, having integrity, entirely in accord with truth and fact.”  David loved the laws and commands of God.

Psalm 119, the longest chapter in the Bible, is basically a hymn of praise for the wonders and benefits of the law of God.  God honoured it with a central position in the Bible.

To the law and to the testimony! If they do not speak according to this word, it is because they have no dawn.  Is. 8:20, NASB

The law gives light.  That sounds like something we need today rather than banishing it to a bygone era.

Mosaic Law And
The New Testament

Yes, but all those quotes are from the Old Testament where they lived under the Mosaic Law.  The Mosaic Laws were superior to other cultures so, of course, they raved about them.  What about the New Testament?

“Do not think that I came to abolish the Law or the Prophets; I did not come to abolish but to fulfill.  For truly I say to you, until heaven and earth pass away, not the smallest letter or stroke shall pass from the Law until all is accomplished. Whoever then annuls one of the least of these commandments, and teaches others to do the same, shall be called least in the kingdom of heaven; but whoever keeps and teaches them, he shall be called great in the kingdom of heaven.  Matt. 5:17-19, NASB

Jesus plainly said that He did not come to abolish the law but to fulfill it.  The word “fulfill” means: “to make full, to complete, to fill to the brim, to render perfect, to carry into effect, to ratify.”  If you search how this word is used in the New Testament you will discover that it always means to complete something, not to do away with it.  Jesus is the completion of the Law.  He brings out its truest and highest meaning.

But we know that the Law is good, if one uses it lawfully, realizing the fact that law is not made for a righteous person… 1 Tim. 1:8-9, NASB

Is Paul saying that the Law is good as long as it is not being misused?  Yes.

The Bible always honours the Law when it is used correctly.  It comes harshly against legalism and other abuses of the Law.  For example, we come against drunk drivers, but we don’t outlaw cars.  Even so, we fight against abuses of law without destroying the law.

Social Context Of The Law

Now, let’s admit it.  Some of those laws do sound harsh or foolish to our modern ears.  This is not a fault of the Law, but of looking at things often from a humanistic perspective rather than a Godly one.  So how do we look at these laws?

1.  We approach them with respect, believing that an all-wise, all-loving God has a perfectly good reason for them even if we fail to understand it.  We do not begin with doubt and scorn like the humanists and even some Christians.

2.  We realize that many of the laws are case laws.  What that means is that we are given practical examples of the law.  Some of them are minimum case laws, in other words, they show the extent to which the laws goes.  For example, the law on not to muzzle the ox as it treads out the grain [Deut. 25:4] is applied by Paul to show that people need to be given fair wages [1 Cor. 9:9] and elders should receive honour [1 Tim. 5:18].  The ox is merely an example of a legal principle that needs to be applied in a wide variety of situations.  The fact that an ox is used as an example shows that this law even applies to how animals are treated; therefore, laws against cruelty to animals find their foundation in this Mosaic Law.  An example may become outdated, but not the legal principle it illustrates.

3.  In order to correctly understand the Laws, we do have to understand the culture and society in which they were given.  Many of the laws that confuse us or that we find abhorrent made perfect sense to people to whom they were first given.  Humanists love to rip individual laws from their Biblical and social context, misinterpret them and then heap scorn on them and/or the Bible in general.  [For example see:  Does The Bible Force A Woman To Marry Her Rapist?]  Christians who are ignorant of the Law, its purpose, and how to interpret it are sometimes carried away with their foolishness.

4.  We have to remember that the Law was given to the people of God.  They were given to maintain a Godly nation, not to be imposed on an unGodly nation [although God will judge all nations according to His law].  A minority of Godly people cannot force the laws of God on a majority of rebellious people, although they can live them in their own lives.  Take, for example, the crime of adultery.  It was a capital crime.  However, 1.  In a Godly nation it would be a very rare crime and 2. Capital punishment was likely the maximum punishment, not the required punishment.  The only crime that required capital punishment every time was murder.

5.  Some laws have changed their application in the New Covenant period.  For example. we no longer have animal sacrifices because they were a type and shadow of the sacrifice of the Lord Jesus Christ.  Once the antitype has come, the type is no longer needed although we can still learn from it.

Are man’s laws better than God’s laws?  Jesus said to judge by the fruits.  I can guarantee that when Israel followed God’s laws crime was a very minor part of life.  What about the fruits of humanistic law?  Babies by the millions are murdered before they are born, sexual slavery is widespread, murderers, rapists, kidnappers abound and when caught often spend little time in jail before being released to attack new victims, theft is epidemic, government oppression, even in “free” societies, is oppressive, a great number of high school students in the US fear for their safety daily at school, etc.  I can see where man’s law has been a resounding success - for Satan who loves to kill, steal and destroy!

The idea that man's laws are better than the Mosaic Law given by God has some serious implications.

1.  God did the best He could under the Old Testament social conditions.  This implies that there is a work of God that is not perfect; therefore, God is not perfect.

3.  If man’s law treats people with more care and concern than the Mosaic law, then sinful man is more caring and compassionate than God.

We need to be careful of the implications of the things we say we believe.  How we handle the Law of God is very important.

For those of you who are interested in “digging” into God’s Law and its applications in modern society there are several good books available including: Institutes Of Biblical Law by Rushdooney, Tools Of Dominion by Gary North and Law Of The Covenant by James Jordon.  The last two are available free in digital form at Free Books.  Also see Master Life.