“Save when there shall be no poor among you; for the LORD shall greatly bless thee in the land which the LORD thy God giveth thee for an inheritance to possess it:  Only if thou carefully hearken unto the voice of the LORD thy God, to observe to do all these commandments which I command thee this day.”  Deut. 15:4

God promised that in a Godly nation there was the possibility of “no poor.”  This does not mean that everyone would be rich, but it does mean that poverty would not exist.

How does God plan to destroy poverty?  What is His tool to rise the poor from their condition?   If you have been following my writing for any amount of time you probably already know the answer:  Biblical Law.  If we carefully obey and apply the Law of God poverty will decrease and then disappear from our lives, our nations, and our world.  It is really that simple...and that hard.

Unfortunately, many people think that have better ideas than God.  They think they can help the poor out of their poverty in ways not allowed by God.  If obedience to Biblical Law is the God-given way of helping the poor [among other things]’, it follows that any of the man-made ideas which oppose Biblical Law would end up hurting the poor.  The Bible confirms this in Proverbs 12:10: “...the tender mercies of the wicked are cruel.” 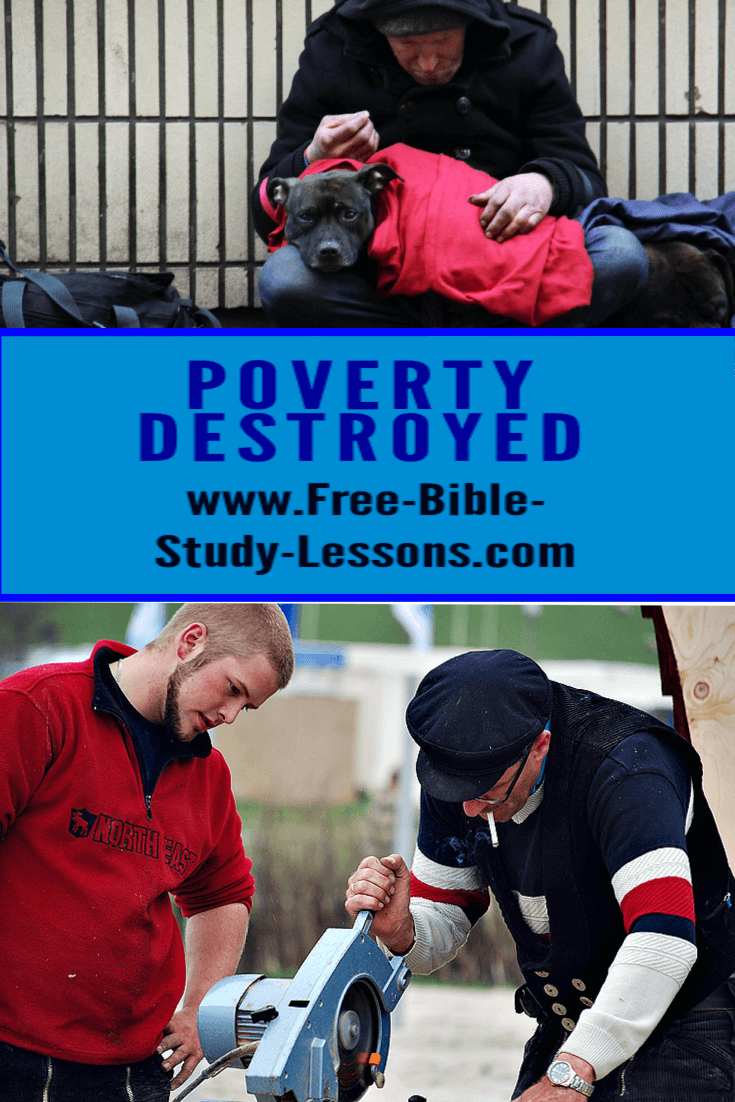 The greatest violators of Biblical Law today are civil governments and the citizens - including Christians - who support and demand their ungodly programs and laws.  If civil governments would limit themselves to their Biblical mandate, the vast majority of poverty in the world would disappear.

For an example, let’s slaughter one holy cow:  Minimum wage.  Government sets and enforces - with violence if necessary - minimum wages that can be paid in a given industry.  This, we are told, is to help the poor.  Gullible Christians and others believe them.  The Bible sets no minimum wages, nor does it grant authority to any government to do so.  Any wage contract that is agreed to between two parties - without violence or fraud - is valid.  You may think the wage is too low, but if it is agreed upon by the parties involved then it is none of your business.

What happens with minimum wages laws?  The poor are actually prevented from working!  If an employer has to pay a minimum wage, he is going to hire strictly according to personal preference - which often excludes the poor and minorities.  If; however, the poor are able to offer their services for less than someone else is willing to work for, the profit motive comes into play and they may end up with the job.  No one says they are locked into that job or wage forever.  It
a] produces immediate income for them,
b] gives them job experience, and
c] allows them to develop a good reputation.
If the employer refuses to raise the wages as they gain experience and prove themselves, it is easier from them to find work somewhere else.  They can then, over time, work themselves out of poverty.

Who benefits from minimum wage laws?  Often they are promoted by unions in order to protect their members from lower priced competition.  By the violence of humanist law, this forces employers to pay above market prices for wages.  This, in turn, forces the price of goods and services up and not only prevents the poor from getting jobs, but also puts the cost of goods even further beyond their reach.  Our support of this unjust law also forces us to pay more for goods and services than we would otherwise have to.  Governments also support minimum wages laws because they are popular with their citizens and because it is a way to further their socialist goals and population control while appearing to desire to help the poor.

This principle applies in every area of unBiblical government interference:  zoning, business licenses, property tax, eminent domain, unnecessary industry regulations, education, etc.  The people who are hurt the most are the poor.  If we really want to help the poor we need to get the government out of the way.  If we, as a nation, will commit ourselves to following Biblical Law and tearing down humanist law, then there truly will be no poor among us.