The vast majority of what we know about Mary mother of Jesus comes from the events surrounding the birth of Jesus.  The recorded events of her life take place between 6 BC and AD 30 or between 4040 and 4070 years after creation.

The Old Testament has many general prophecies concerning the line through which the Messiah would come starting at Gen. 3:15 where the Messiah is said to be the Seed of the woman [not the man] and continuing over time to be narrowed until we come to the Davidic line in the tribe of Judah.  Isaiah gave a specific promise that the Messiah would be born of a virgin. 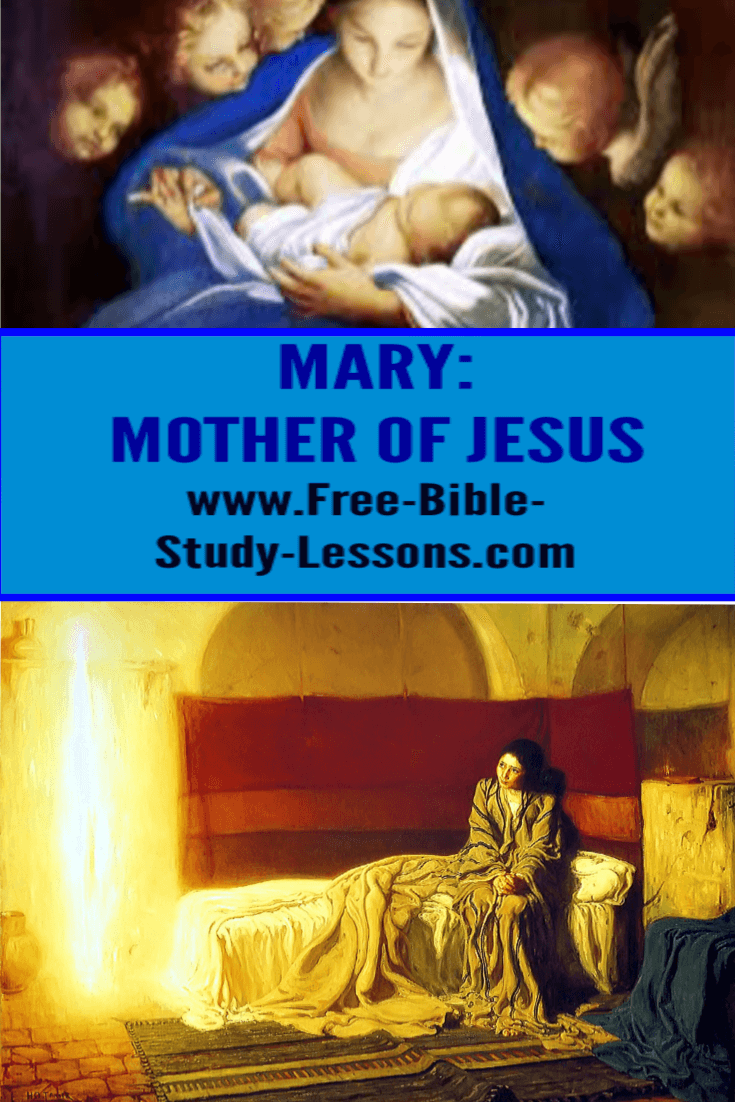 We do not know Mary’s age for sure although many believe she was a teenager when she was pledged to be married to Joseph.  Being pledged to be married was stronger than the modern day engagement in that, although they were not married with the privileges of marriage, it required a formal divorce to break the pledge.  We also know, from the gifts that Mary and Joesph brought at the purification ceremony, that they were very poor.

We know that Mary loved God and lived a pure - but not sinless - life.  Even though poor, she found ways to learn the Word of God.  She was obviously familiar with Hannah’s prophecy spoken over a thousand years before.  She referred to herself as “blessed among women” using the same term Deborah had used of Jael [Jud. 5:24].  We know she was a person who thought deeply about things for she is mentioned as treasuring things in her heart when she didn’t understand them.

The Call Of
Mary, Mother Of Jesus

Let us walk through what we know of her life…

One day, as Mary was going about her normal duties, the angel Gabriel appeared to her.  Many times when angels appeared to people they took on normal human form.  It is likely that Gabriel did the same for Mary was not shocked by his appearance, but by what he said.  Mary was told that she was “highly favoured” and that “the Lord is with you.”  Those statements troubled her.  Perhaps, like many of us would have, she was wondering what kind of bad news she was being prepared for!  Gabriel set her mind at rest.  No bad news, but the greatest news possible.  She had been chosen, in the grace of God, to be the mother of the Messiah that had first been promised over 4,000 years ago.  She was to have a unique and honoured place in history.

As overwhelming as this news was, Mary was puzzled.  Maybe the angel had made a mistake.  She was a virgin, she wasn’t married, how could she have a child?  Unlike Zechariah, this was not doubt but a sincere wondering how it could happen or what she would have to do to make it happen.  The angel assured her that she did not have to do anything.  The Holy Spirit Himself would implant the Seed and it would indeed be a virgin birth.  That removed all the problems.  Mary gave God permission to accomplish His will in her life.  Now she could really get excited!

Gabriel had mentioned that her cousin, Elizabeth, was going to have a miracle child.  As soon as she could, Mary left for a 3 month visit with her cousin.  The moment Mary entered Elizabeth’s home, Elizabeth’s baby leapt in her womb for joy [showing, by the way, the humanity of unborn children and how murderous abortion is].  Elizabeth was a great encouragement to Mary and they rejoiced together in the parts they had been given in God’s great plan.

When it was time for Elizabeth to give birth to John the Baptist, Mary left for home.  It was a tough home coming.  She was 3 month’s pregnant.  She had to tell the man pledged to be her husband and the whole town a story they most certainly would not believe.  Her earthly love, Joseph, decided the only God-honouring thing he could do would be to divorce her.  He loved her and did not want to put her through more pain than was absolutely necessary so he determined to divorce her as quietly as possible.  Mary was faced with rejection by her loved ones and the prospect of being a single mother in a society that made that very difficult.

However, God did not abandon Mary or His Son.  An angel confirmed to Joseph that Mary’s story was true.  He then reversed his decision and accepted her as his wife, although they refrained from sex until after Jesus was born.  Now life in Nazareth was difficult for both of them as they endured the shame and rejection of a couple [falsely] accused of having pre-marital sex.  The pressure was so great that when Joseph had to leave to go to be registered in Bethlehem for tax purposes a nine-month pregnant Mary made the journey with him rather than stay at home.  Since they later got a house in Bethlehem, it is unlikely that either ever intended to return to Nazareth. 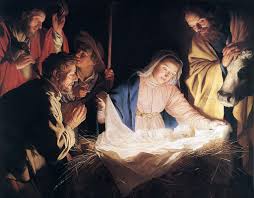 Birth And Childhood
Of Jesus

When Mary and Joseph arrived in Bethlehem it was bursting at the seams with all the people arriving to register.  There was no place for them to stay except a stable.  It was in that dirty and uncomfortable place that Mary gave birth to her firstborn: Jesus.  She wrapped him in cloths and laid Him in a manger undoubtedly cleaned as well as Joseph could.

Heaven was excited that the final stage of God’s Covenant plan had begun.  Angels appeared to the shepherds on a nearby hill announcing to them what had just happened.  As soon as the angels left, the shepherds hurried off to see this Wonderful Child for themselves.  Then they spread the news to everyone who would listen.

As every Jewish boy was, Jesus was circumcised when He was eight days old.  At least 41 days after Jesus was born Mary and Joseph went to Jerusalem to perform the purification ceremony [Lev. 12].  It was there that Simeon and Anna prophesied over Jesus.

Luke now records that they returned to their “own town of Nazareth” because that is the end of his record until Jesus was 12 years of age.  Nazareth is indeed where they ended up [which was Luke’s point] but it is not directly where they went after the purification in Jerusalem.  It would appear, according to Matthew, that they returned to Bethlehem for a season.  Respected commentator Matthew Henry confirms this, “Luke related no more concerning them, till they were returned into Galilee; but it appears by St. Matthew’s gospel that from Jerusalem they returned to Bethlehem…” Vol. 5, pg. 606.

It is a common misconception that the wisemen [magi] visited Jesus at the stable with the shepherds.  Herod the Great diligently inquired of the wisemen when they had first seen the star and later he had all the boys two years old and under in Bethlehem murdered.  It is likely he chose that age because of the information he had obtained.  That would make Jesus somewhere between 1 and 2 years of age when the wisemen visited [and still living in Bethlehem].  Again, it is commonly assumed that there were three wisemen because there were three gifts, but the Bible never directly states how many wisemen there were.  In any case, they arrived and gave Jesus gifts of gold, frankincense and myrrh.  Then, after being warned by God in a dream, they left - avoiding Jerusalem and Herod.

Herod was furious.  He was an unstable man at the best of times murdering family members and strangers alike.  This order was so inline with his character and cruel deeds that secular historians do not even take note of it.  When the wisemen left, Joseph was warned to flee to Egypt.  He obeyed immediately and Jesus escaped the massacre.  After Herod died, Joseph was told by God in a dream that it was safe to return.  He probably intended to return to Bethlehem, but the political situation gave him little choice.  He had to return to Nazareth.

When Jesus was twelve years old His parents took Him to Jerusalem for the Feast of Passover.  Perhaps it was during this time that they told Him of the miraculous events surrounding His birth.  In any case, He was fascinated by the temple and all that He was learning and seeing.  Like with many young people, time escaped from Him.  It never occurred to Him that His parents would be worried about Him and looking for Him.  He knew where He was and what He was doing!  After three days of frantic searching Mary and Joseph found Jesus in the Temple area.  Mary scolded Him for the worry He had put them through.  Jesus was surprised that they had been worried, but obediently returned with them to Nazareth.

Adult Relationship Between
Jesus And Mary

Except for this one incident, Scripture is silent on the life of Jesus until He is about 30 years of age.  There are many crude and fictitious accounts of miracles or events durning this time.  The implication of Scripture is that it was a normal family…so normal that people thought He was crazy for claiming to be the Son of God…they knew Him and His family - He was just a poor carpenter.  Contrary to religious myths, Mary and Joseph had a normal marriage and Jesus had step-brothers and step-sisters.  After the trip to Jerusalem for the Passover Joseph disappears from history.  This leads some to believe [and it is likely true] that during this period Joseph died leaving Mary a widow and Jesus responsible for providing for the family.

After this Mary, mother of Jesus, has very few Biblical appearances in the life of Jesus.  We see her next at the wedding in Cana - which was probably a relative of some kind.  If Joseph had indeed died then Mary was accustomed to looking to her eldest Son for help.  So when the wedding celebrations ran into serious trouble she went to Jesus with the problem.  It does not appear the Jesus was eager to become involved, but she was confident in Him.  And so Jesus’ first miracle was performed - turning the water into wine.

Interestingly the next incident is recorded by Matthew, Mark and Luke.  Mary, along with Jesus’ brothers and sisters, went to see Him for an unknown reason, perhaps family business.  Instead of dropping everything and rushing out to meet them, Jesus turned it into an opportunity to teach that the family of God supersedes the human family.

Mary, mother of Jesus, was at the cross.  The sword had pierced her own heart.  Jesus had fulfilled all this family duties up to this point, but now He was not going to be able to do so any longer.  So He committed the care of His mother to His disciple John - not to His natural brother.  Again, this shows the priority of the family of God over natural family relationships.  We don’t have any record of Mary being among the women at the tomb, but perhaps she was.

Mary mother of Jesus holds a unique place in history.  She was an obedient vessel for the grace of God to flow through to bring the Messiah into the world.  Some have tried to give her a place above what Scripture gives and that we must resist and expose without detracting from the honour and respect that is her due.

Cost Of Christmas, The

Did Jesus Disrespect His Mother?

What Is The Relation Of Mary To Prayer?

Why Was The Virgin Birth Necessary?