Does God Cause
Natural Disasters?

If God is sovereign and controls nature, why do natural disasters strike and what is the correct Christian response?

“He called down famine on the land and destroyed all their supplies of food;” Ps. 105:16, NIV

Psalm 105:16 is an interesting verse. It speaks of the famine in the land of Canaan during the time of Jacob. God called for the famine. In some way it was a part of His plan and purpose. As Creator, we know God controls nature. Although He has placed natural laws in the universe, which we discover through scientific inquiry, God still rules over all.

God is at war, a war that will impact people not just in time but for all of eternity. The stakes - eternal souls - are high. His war against sin sometimes involves hard actions. It cost Him the life of His beloved Son. His martyrs, His front line soldiers, have laid down their lives by the millions. Even today about 100,000 people a year lose their lives in the cause of Christ. 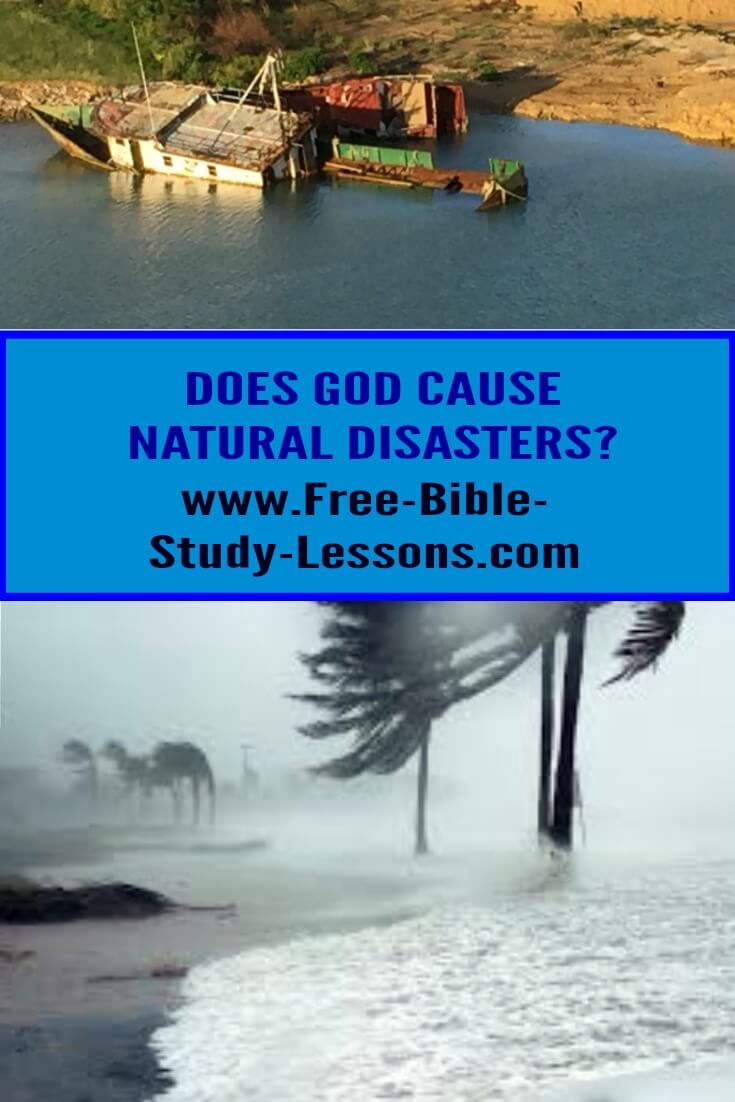 Often natural disasters come as a part of God’s war and judgment on sin in a nation or even in the world at large [even more so as we become a “global village”]. Sin is a cancer that God cannot allow to grow in His universe. It will destroy everything. God judges sin on every level: personal, family, church, provincial/state, national, and even entire civilizations. [It should be noted that Satan tries to imitate God’s control by man-made disasters. Most of the famines, ecological disasters, etc., are the result of sinful man's actions - usually in the form of government oppression or mismanagement.]

Sometimes God delivers His people from the disasters [i.e. the Flood, AD 70]. Other times He allows them to go through the same things as those in rebellion to Him. We are affected by the society around us for better or worst. Although, as Christians, we know He is going to work it out for good in our lives.

Natural disasters are a clear sign that something is seriously wrong and needs instant correction. When the Puritans first came to America they recognized this principle. Whenever there was a crop failure, an Indian attack, or other disaster they would meet to repent and seek God as to why His hand of protection had been removed.

What is our attitude in the face of natural disasters? What was God’s attitude? When Adam sinned judgment was inevitable. Because God is perfect justice, He must bring judgment. The price for rebellion must be paid. But what did God do? For God so loved the world that He gave His only begotten Son... God’s love does not cancel His judgment, but provides a way of escape through Jesus Christ.

Our Reaction To Natural Disasters

First, we don’t blame God. His judgment comes because of sin which is our fault. He has provided the way out of sin and into righteousness. If we refuse to take it we have no one to blame but ourselves. Even the worse things which happen on earth are only a small picture of the perfect and eternal justice of God expressed in Hell. All natural disasters should serve as giant warning signs of worse to come if we persist in rebellion and do not submit to Jesus as Lord and Saviour.

Second, repent on whatever level is necessary. Repentance means a change in our lifestyle. We have to abandon our humanistic fantasies and return to taking the entire Word of God seriously [see Master Life].

Third, we reach out with love and compassion to those who are suffering from natural disasters. We are not judgmental. We show the unconditional love of God in ministering to the needs and hurts of those immediately affected. It is an opportunity to show the love of God - not the condemnation of the Pharisees. It is an opportunity to relieve physical suffering [as Jesus did when He walked the earth], and point people to the only way to relieve spiritual suffering and avoid an eternity in Hell.  Just as God did not dispassionately leave us in judgment, but actively came to our rescue by sacrificing His dearly loved Son so He could save us.

Why do natural disasters strike one place and not another? Only God knows. It - as Jesus pointed out - is not because they are any worse than anyone else. We cannot afford to be proud, haughty, or condemning. We all deserve death and Hell. And if there is not serious national and even international repentance and returning to the ways of God, I suspect we will see an increase in natural disasters. This has nothing to do with carnal end-times theories, but is a simple cause and effect. To reject God is to embrace the cancer of sin and to mark oneself out for judgment.

"I'm laying this out as clearly as I can, even though you once knew all this well enough and shouldn't need reminding. Here it is in brief: The Master saved a people out of the land of Egypt. Later he destroyed those who defected. And you know the story of the angels who didn't stick to their post, abandoning it for other, darker missions. But they are now chained and jailed in a black hole until the great Judgment Day. Sodom and Gomorrah, which went to sexual rack and ruin along with the surrounding cities that acted just like them, are another example. Burning and burning and never burning up, they serve still as a stock warning...But these people sneer at anything they can't understand, and by doing whatever they feel like doing—living by animal instinct only—they participate in their own destruction." Jude 5-11, The Message

"God didn't let the rebel angels off the hook, but jailed them in hell till Judgment Day. Neither did he let the ancient ungodly world off. He wiped it out with a flood, rescuing only eight people—Noah, the sole voice of righteousness, was one of them. God decreed destruction for the cities of Sodom and Gomorrah. A mound of ashes was all that was left—grim warning to anyone bent on an ungodly life. But that good man Lot, driven nearly out of his mind by the sexual filth and perversity, was rescued. Surrounded by moral rot day after day after day, that righteous man was in constant torment." 2 Peter 2:4-8, The Message