The Key Verse Of The Bible

"And I will put enmity between you and the woman, and between your offspring and hers; he will crush your head, and you will strike his heel.”  Gen. 3:15, NIV

And I will - God is speaking.  What He declares will happen, will happen.  There is no doubt about it.  No one can successfully oppose the will of God.  Many try, but God's "I Will" stands firm. 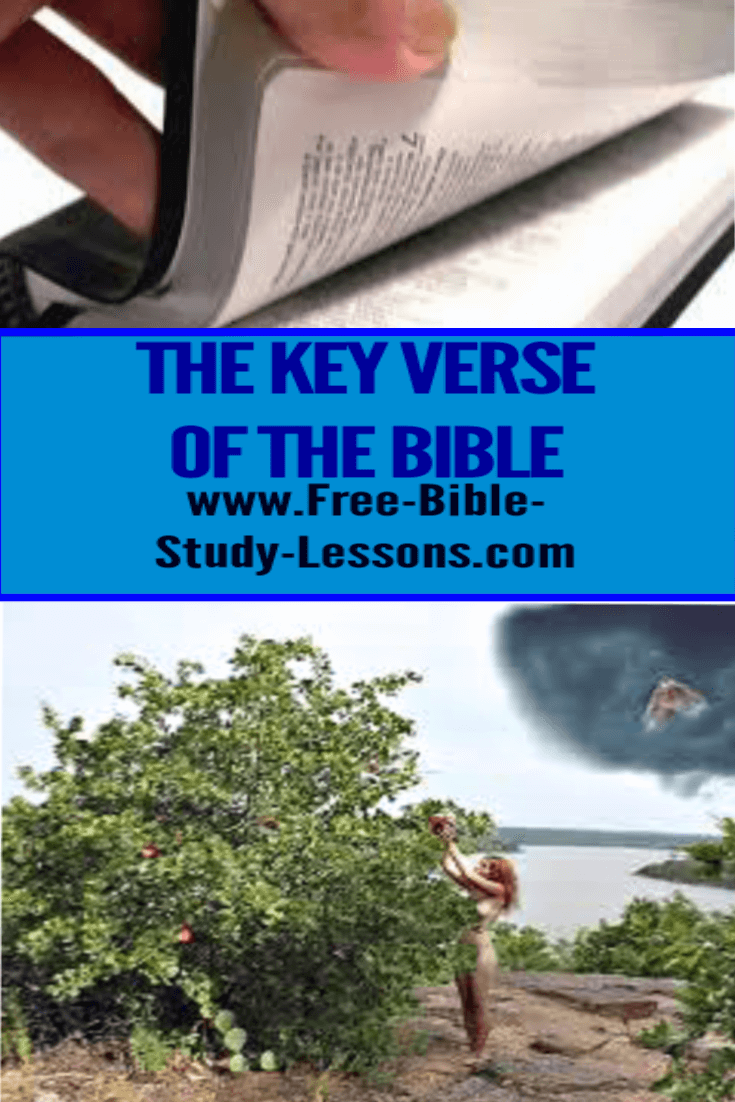 put enmity -  So, in this verse, what does God's "I Will" do?  God is going to put enmity or hatred between two beings.  That sounds strange, to say the least.  If you read the context [as I am sure all the Feed Yourself students will do :) ], you would know that God is speaking to Satan who is in the form of a serpent.  God created a perfect universe without pain or death.  Satan tricked Eve into sinning in order to get to Adam.  Adam willfully joined Satan in rebellion to God in order to maintain his relationship with Eve.  Satan hated God to begin with, but now God is speaking of putting the enmity or hatred between Satan and someone else.

between you and the woman - Notice it does not say "a woman" or women in general.  This hatred is to be against THE woman.  Who is the woman?  Obviously, at that point in time, Eve was the only woman on the planet.  God is looking far beyond that.  Eph 1:4 states that we were chosen in Christ before the world began.  That means that we were chosen before God spoke to Satan in the Garden of Eden.  God already had in mind His Bride - THE woman - His church of redeemed people.

So why is this a punishment on Satan?  It seems like it is a punishment on the woman, the bride of Christ.  If we feel this way it is because we are looking at things from an earthly perspective.  Satan's hatred for the bride of Christ, the Church, causes him to attack it again and again.  But in doing so he matures the bride allowing her to become more attractive to Christ as time and time again the warrior bride defeats Satan through the power of the Holy Spirit.  Although he may appear to succeed from time to time, Satan is actually locked into a permanent defeat until the final judgment.  He is too blinded with the fury of hatred to realize his real position.

and between your offspring and hers - We know Satan, as a spiritual being, cannot physically reproduce.   God has only granted the physical creation the ability to reproduce.  Who are the offspring of Satan then?  Satan's offspring are the human beings he infects with his hatred of the church.  Have you ever wondered why Christians, who - for the most part - are peace-loving people who want to live quiet lives and benefit society at large, are viciously persecuted?  Why are about 150,000 murdered every year while others are beaten, tortured, raped, or have their possessions stolen or destroyed?  Why do governments use their power in an attempt to destroy the church?  Why do pro-abortion groups seek the "right" to murder millions of innocent children?  Why do Gay groups protest against bullying and yet violently bully Christians?  Satan's offspring expresses his hatred for the Bride.

he will crush your head - God has been talking about Satan, the woman, and their offspring.  Who is this "he" who suddenly shows up.  He is an offspring of the woman, but he is different.  He is the One Who is going to defeat Satan.  In the Garden of Eden, Satan was told that Someone was going to come Who would crush his head.  That Someone would be the Seed of the woman [not the man indicating the virgin birth].  That Someone would succeed where everyone else had failed.  He would not only stand successfully against Satan, but also He would totally defeat him.  All through the Old Testament you can trace Satan's efforts to keep this Someone from coming.  But no one successfully opposes God's "I Will."  In the fulness of time Christ was born, faced Satan and defeated him.

and you will strike his heel. - This victory would not come without a cost, however.  God Himself would become Man [see The Making Of A Blood Covenant].  God would subject Himself to the attacks of Satan, He would feel the pain, He would endure the pollution of a sinful, rebellious world.  And He would allow Himself to be ripped to shreds physically, emotionally and spiritually on a cruel cross.  And finally, He would live in a scared human body for eternity.  Oh, the love of God for His creation!  The cost was great, the heel was wounded, but better a crushed heel than a crushed head!

Often we only see the surface, but underneath every conflict is Satan's war against God by attacking THE woman and her offspring.  Christ has already won the victory, but Satan is busy trying to prevent it from taking full hold on this planet.  Meditate on this key verse of the Bible and you will see behind what is happening in Scripture and the world today.  Our study of Covenants traces the development of this key verse in Bible as the plan of God is unfolded.