What Is The Biblical Style
Of Civil Government?

What style of civil government should people have to rule over them?

“May you answer the following question wisely, because, other than the first all-important questions which deal with eternal life [that is, What will you do with the Christ? Will you receive Him or reject Him as Saviour and Lord?], the next most important question, with respect to this world is: What will you allow civil government to do to you? That is, What is [its] ...proper role...in a society of free and self-responsible individuals?” Tom Rose, Economics: Principles and Policy, pg. 83

Considering the evil and harm toward which civil governments naturally trend, some have questioned whether we are not better off without them altogether. At first this may seem like a good idea; however, it is not Biblical. The Bible does give civil government a legitimate - but limited - place in society.

The result of no government is called anarchy. The problem with anarchy is that it supposes mankind is basically good.  The idea is that left to themselves everyone would work out their own problems and get along. Of course, the Bible reveals mankind has been corrupted and so we all start with a sin nature. In practice, what happens in anarchy is the most powerful people rise to take advantage and abuse the weaker people. There is no government to stop them or restrain their violence. They, in fact, become a new government and so a state of anarchy [no government] does not last very long.

Biblical Boundaries
For A Civil Government

So what should we be looking for in a civil government? What are the qualifications and boundaries for such a government?

1. All the officers of the civil government are to be dedicated to following the laws of God. They are to personally write out the book of Deuteronomy upon taking office in order that they know the foundational laws of God and do not come to think that they were superior to others in society. [Deut. 17:18]

2. The civil government is to enforce God’s Law on the nation. Only God can declare ultimate Law. Any laws made by a civl government are only application laws, i.e. practically applying God’s Law in a specific situation. In other words, they are to be representatives of God in working out differences between people in the society which the individuals or organizations could not work out for themselves. This includes, of course, punishing criminal activity. [Deut. 1:16-18, Rom. 13:4]

3. The civil government is to maintain a defensive military to protect the nation from outside invaders. This could be a trained volunteer force or a limited core of professional soldiers supplemented by trained volunteers as needed. It would supply enough advance technology and training to defend the nation, but would be insufficient to be an aggressive force.

4. Although not specifically mentioned, it is implied that the government could maintain a police force to protect citizens against the activities of criminals. This would include medical quarantine and certain public safety issues.

“The civil government possess a monopoly: the monopoly of violence. It alone has the right to inflict fines, physical punishment, and death on those who violate the laws of God and those statutes written by men in conformity to God’s legal principles.” Dr. Gary North, Inherit The Earth, pg. 155

“...the most basic function - indeed, the only necessary function - of civil government is to safeguard property so that individuals can go about exchanging good and services with each other peacefully and for mutual benefit.” Tom Rose, Economics: Principles and Policy, pg. 95

“Government is not reason, it is not eloquence - it is force. Like fire, it is a dangerous servant and a fearful master.” George Washington quoted in Tom Rose, Economics: Principles and Policy, pg. 84

5. Taxation is to be limited [not to equal or exceed ten percent of a person’s income] and equal for both the rich and the poor. Such a limited income forces a civil government to deal only with its Biblical mandate as it would not have the funds to develop into the socialistic monsters we have today. [Ex. 30:15]

What Is The Correct Form
Of Civil Government? 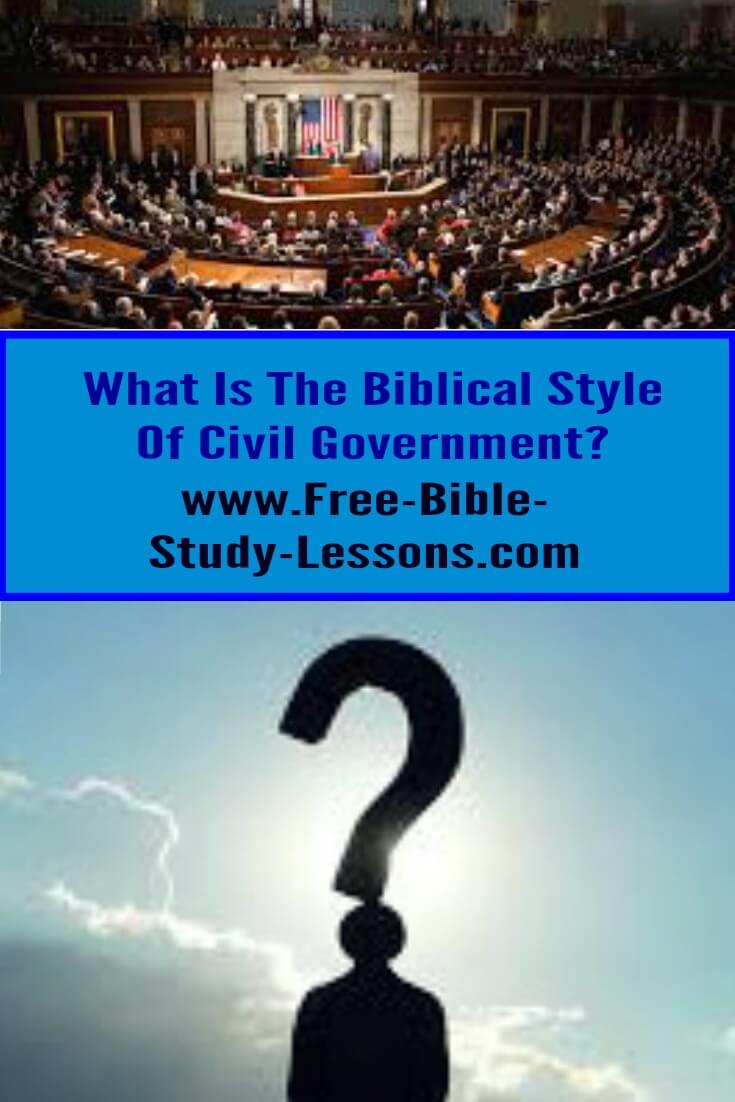 As far as how a theocracy would be practically worked out in the style of the government, the Bible does not say. That is part of mankind working out Biblical principles in daily life. This means that different nations could choose different forms of government - all under God - and still be perfectly acceptable before God.

Dictatorship: Moses was the absolute ruler under God. From a human perspective, his word was law. He did develop a system of representatives/judges that were accepted by the people and had direct rule over the people. This gave it many of the features of a democratic republic.

Military Dictatorship: Joshua was the general/leader with absolute authority over the nation under God. Presumably he kept the system of representatives/judges established by Moses. He allowed the people freedom of choice even in their religious beliefs. He knew that you cannot force from the outside convictions on the inside.

Judges: Men and women were chosen by God and accepted by the people as leaders. They often united the people to throw off foreign oppressors and then served to bring God’s justice to society.

Monarchy: Saul, David, and others ruled as kings. Their reigns were a success or a failure depending on how much they were submitted to God’s overall theocracy. There are no large monarchies existing today. Some monarchies - such as England - are really republics because the royal figure has little or no power in the civil government.

Other Styles Of Government

Other forms of government include:

Democracy: A democracy is a rule by the people. The majority wins. This works if the majority are righteous people. If the majority - or the active majority - are evil then evil wins. It can be corrupted very quickly when the people learn they can vote themselves money through socialist theft. The bottom line is mob rule. It has no ultimate rule of right and wrong. Whatever the majority decides is right must be right. A strict democracy is not possible when a lot of people are involved,  because it is too difficult to have everyone vote on every issue.

Republic: A republic is a practical democracy. Instead of every person voting on every issue, the people vote for representatives who will vote on the issues for them. The representative getting the most votes represents everyone in his district or “riding” whether they voted for him or not. This sounds good, but again there is no ultimate right or wrong so it depends on the character of the people and leaders to succeed. It becomes the job of the representative to promise whatever he has to in order to get reelected. Long-term planning is difficult because government may change every few years. When the wicked are the majority, representatives of integrity who make hard decisions for the overall good of the country probably won’t get reelected. People of compromise and low character - who are willing to “play the game” - tend to rise to the top.

“Government is a broker in pillage, and every election is a sort of advance sale of stolen goods.” H.L. Mencken [1880-1956] quoted in Tom Rose, Economics: Principles and Policy, pg. 85

Aristocracy: An aristocracy is a rule by aristocrats, who are generally wealthy, educated people in society. People of influence rule over everyone else. They decide what is right for the nation and everyone else has to live with it.

Canada is a constitutional monarchy. The Queen of England is our head but civil government is controlled by our constitution as represented by our elected party members.

“The essential idea behind a constitutional republic is that man tends naturally rather toward evil than toward good, and will enslave his fellow man if given the opportunity. Therefore, it is necessary to limit his potential for doing evil by binding him down to a written set of limitations on the power he can wield in the political sphere, the sphere in which coercion is used.” Tom Rose, Economics: Principles and Policy, pg. 73

Interestingly Moses, Joshua, and some of the judges maintained their integrity throughout their time in power. They were men and women committed first of all to God and they were not corrupted by power or driven by the whims of people. Some of the judges became corrupt later in their rule. All the kings had times of corruption and only David and one or two others had reigns which were basically good throughout.

Whatever form of civil government a nation chooses, from dictatorship to democracy, there must be safeguards in place to limit the government to its God’s ordained function and to limit its taxing power [which includes not being in control of the money supply]. There must be a system in place to remove leaders who violate the limits of government.