In The Beloved:
The Father's Love

“To the praise of the glory of His grace, wherein He hath made us accepted in the beloved.”  Eph. 1:6, KJV

To know something of the love of God one must have some understanding of what has happened in and to the Son of God, ‘the Beloved’.  It is in Him that we measure the love of God truly.  The very fact that God ever sent Him into this world is astounding in and of itself.  We cannot conceive of these things; our minds are too small, they boggle at the conception.  We cannot conceive of eternity, bound as we are by the idea of time.  We ourselves, and our minds, are finite, so our very thinking is limited. It is difficult for us to grasp the idea that there was never any beginning to God the Father, God the Son, and God the Holy Spirit, that they exist from eternity to eternity. 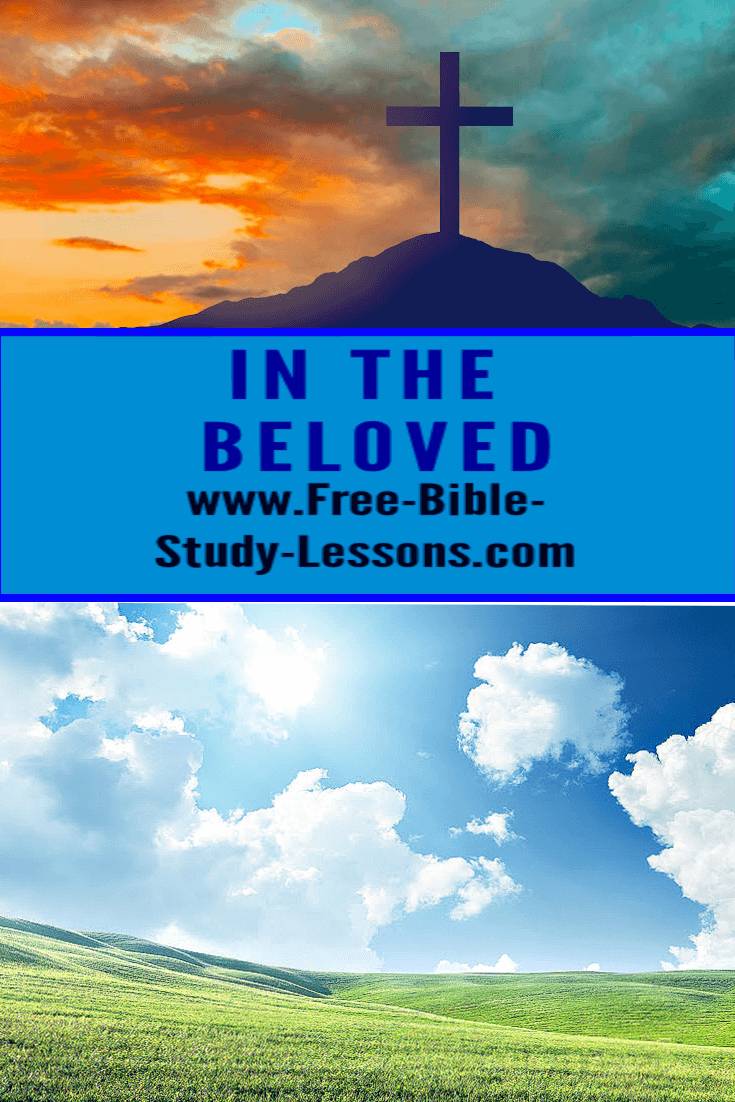 The fact is that the Lord Jesus Christ, the Son, was in the bosom of the Father from eternity.  That is the term used by the Apostle John in his Prologue:  ‘the only begotten Son who is in the bosom of the Father, he hath declared him.’  He was eternally in the bosom of the Father, enjoying the unmixed and perfect bliss and love and holiness and glory of heaven and of eternity; and the astounding thing we are told in connection with our salvation is that ‘When the fulness of the time was come, God sent him forth’ (Galatians 4:4). sent Him out from that glory, out from heaven and the radiance and the glory and the magnificence of it all, sent Him forth into the world.

It was the Father who sent Him.  ‘God so loved the world that he gave his only begotten Son’ (John 3:16).  It is only in the light of that fact that we begin to measure the eternal love of God.  It was His own beloved, His only begotten Son that God sent forth upon this terrible errand, and for such terrible people!  Like the father in our Lord’s parable of the wicked husbandmen, God the eternal Father sends His own Son, His only Son.  He had sent his prophets and other leaders, but they had been rejected and their message had been ignored; but now the time comes when the eternal Father says, I will send forth My Son, My beloved Son, I will send Him to them.

Further, if we are to have some conception of the love of God we must read the four Gospels, and in our minds and imaginations, we must think of God the Father looking down upon all and observing and watching what was happening to His beloved Son.  All parents, surely, know something of this experience.  They send their children out on the voyage of life, and they watch them, they keep their eye upon them, they see the storms and trials coming, and they watch with concern, with love, at times trembling for them, fearful for them.  Multiply that by infinity and we still have no conception of what it meant to the eternal Father to send his Son into the sea of sin and evil in this world.  Such is the love of God.  He sees men reviling His Son, He sees men laughing at Him, He sees men taking up stones to throw at Him, His Beloved.  The God who made the world out of nothing and Who could bring it to an end in a moment, the God with whom nothing is impossible looks on and watches the world refusing His ‘beloved’, persecuting Him and wounding Him.  There we have some measure of the love of God.  As you read the story in the four Gospels remember that it is ‘the beloved’ you are reading about, and that the Father is ever looking at His Beloved and at the world’s treatment of Him.

But let us hasten on to the most astounding thing of all.  We see Jesus staggering up Golgotha; we see Him nailed to a tree.  The Father is still looking down upon it all.  The Beloved is finally rejected, despised of men, spat upon, scourged, hated, reviled, nailed to the tree.  We cannot conceive the agony, the suffering, the shame that were involved.  The Father looks at His Beloved as He endured the contradiction of sinners against Himself.  That is the measure of God’s love.  As the Apostle Paul expresses it in chapter 8 of his Epistle to the Romans, ‘He spared not his own Son, but delivered him up for us all’.  He did not spare the Beloved, though He had loved Him with that eternal love from all eternity, and with all the intensity of His divine being; though He is ‘the beloved’, His Father did not spare Him.  He spared Him no suffering.  He ‘laid upon him the iniquity of us all’; He struck Him, He smote Him with those stripes which we deserved.  And the reason why He did not spare Him any suffering was that You and I might be forgiven.

Thou didst not spare Thine only Son

But gav’st Him for a world undone,

And freely with that blessed One

In The Beloved:
The Son's Love

But let us look at this term for a moment as it is the measure of the Son’s love.  We have been looking at it as the measure of the Father’s love; let us now look at it from the other side.  We must not compare them, it would be wrong and it would be foolish to do so.  And yet there is a difference between a father and a son, and the Lord Jesus Christ is the Son of God eternally, and sonship is sonship for Him also.

So we can look at the Son’s love and what the procuring of our salvation meant to Him.  Try for a moment to think of the self-emptying that took place at the Incarnation in terms of this expression ‘the beloved’.  He who had been in the bosom of the Father from all eternity, enjoying perfect unmixed bliss, decides to leave it for a while.  He through whom all things were made, by whom all things consist, the everlasting Word, the Word of God, the express image of God’s person, humbles Himself, He divests Himself of the insignia, the signs of His eternal glory, and says ‘Here am I, send me’.  He volunteered to become a man, to take unto Himself human nature, to lay aside the prerogatives of His position and of His unique relationship to the Father.  And He entered into the Virgin’s womb.  It is ‘the beloved’ who was there, going through the whole process of development as an embryo,  It is inconceivable, it is baffling; but it is true. Then the time came when He was born in a stable and for want of a cradle they put Him in a manger.

Who is that helpless infant?  It is ‘the beloved’ - the one on whom the love of God had been poured from all eternity.  Now He knows something about weakness and helplessness. Follow the story through - the suffering, the misunderstanding, ‘the contradiction of sinners’.  He spent eighteen years apparently quite unknown, indeed until the age of thirty.  He who had experienced all the fulness of God directly in love, has now humbled Himself and put Himself into such a position that He knows what it is to be lonely, to feel a sense of desertion, and to meet face to face the contradiction of sinners.  He who made all things is suffering at the hands of the very people whom He had made.  That is the measure of His love.  Look at the despising and persecution that followed.  We cannot understand what it meant to Him except in the light of this term ‘the beloved’.  How glad we should be that the Apostle did not say ‘the Lord Jesus Christ’ here, be instead said ‘in the beloved’!

The height of the paradox of this love, the things that no human mind can encompass, is that when you stand at the foot of the Cross and listen, you hear these words being uttered: ‘My God, my God, why hast thou forsaken me?’  Everyone else had forsaken Him, His disciples had fled and had left Him, but now He cries, ‘My God, my God, why has thou forsaken me’?  The one who utters that cry is ‘the beloved’, the one who had basked in the sunshine of the eternal love from eternity, without intermission. He reaches a point wherein even He has lost sight of the face and the smile of His Father.  And He experienced that for you, for me.  If He had shrunk from it we would not be saved, we would not be forgiven, we would not be Christians, we would not be children of the second birth.  The ‘beloved’ descended even to that degree of ignominy and died,  His body was buried in a grave and a stone was rolled against its door.  He descended into hell - ‘the beloved’.  He went ‘into the lowest parts of the earth’ - He who had made everything out of nothing.  And it was for us, and for our salvation.  It is only as we realize who it is who is suffering in that manner that we realize the depth and intensity of His love toward us.

This is an excerpt from Dr. Martyn Lloyd-Jones’ book: God’s Ultimate Purpose.