Would A Gay Wedding Be Attended By Jesus?

Do you think Jesus would attend a gay wedding?  Undoubtedly an answer springs to your mind immediately depending on your preconceived ideas about Jesus and the Bible.  Those, of course, who see nothing wrong with two people of the same gender sharing sexual relations would naturally have no problem with seeing Jesus at a gay marriage ceremony.  On the other hand, those of us who take the Bible seriously as the infallible Word of God would probably be shocked at the very idea of seeing Jesus as a guest at such an event.  But if we are going to be honest, then we have to try to set aside our personal opinions and look at the Scriptures to see what they reveal about the character and attitude of Jesus [and therefore of God Himself] on the subject of a gay wedding.

“You know the next commandment pretty well, too: ‘Don’t go to bed with another’s spouse.’ But don’t think you’ve preserved your virtue simply by staying out of bed. Your heart can be corrupted by lust even quicker than your body. Those leering looks you think nobody notices—they also corrupt."  Matt. 5:27-28, The Message

Before we can attempt an answer to the question of whether Jesus would attend a gay wedding or not, we need to clear up a couple of points.

First, anyone - regardless of their personal opinions - who reads the Bible with even an ounce of understanding can see that God is against homosexuality.  Both the Old and New Testaments are quite clear on that point.  It is nonsense to pretend anything else.  However, Christians are often unfair in their opposition to homosexuality and, therefore; gay weddings.  I say this because God is clearly against all sexual relations outside of the marriage of a man and a woman.  That means common law relationships, adultery, "one night stands," porn, etc. regardless of the genders involved is forbidden.   To point out homosexuality and accept or ignore the rest is the same idea as the Scribes and Pharisees picking out one women caught in adultery [ignoring the man!] and ignoring all the rest - male and female - that they could have found if they had looked.  [From Jesus' words all the accusers had also been guilty of adultery at one time or another.]  By the way, God does not oppose sex outside of marriage because He wants to stop people's fun.  He knows the intense damage it does spiritually, mentally and often physically.

In our modern society we often downplay the concept of sin.  We think of God as a permissive parent who will wink at sin and give us what we want.  And like spoilt brats we complain loudly if anything happens we don't like.  Think of it this way.  If you owned an old scratched, dented VW bug and someone accidentally backed into it and added a small scratch you probably would not notice or care if you did notice.  However, if you had just bought a perfect $500,000 sports car and someone accidentally backed into it and put a small 1/2 inch scratch on it, you would care quite a bit!  Our lives are so dented and scratched with sin that we don't notice one sin more or less, but God is perfect and any sin is a glaring offence. 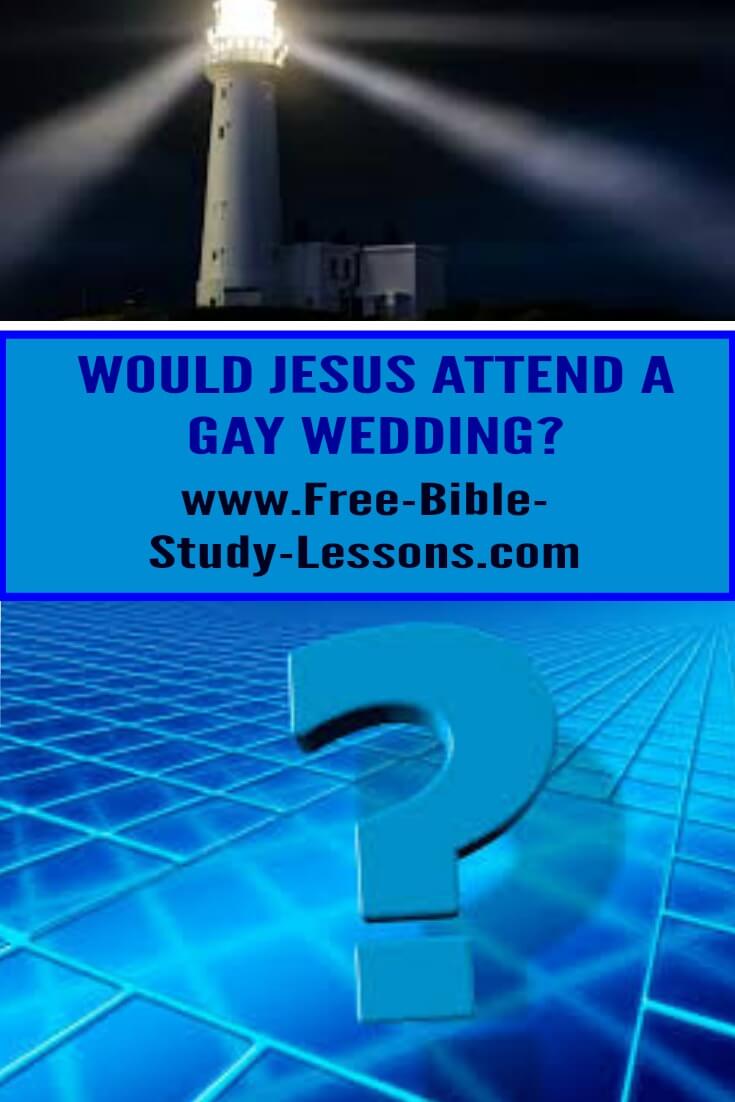 What is sin?  Sin - any sin - is the violent violation of God's nature and character.  At this level the type of sin is immaterial.  Gossip, lying, adultery, murder, stealing, homosexuality, hypocrisy, envy, jealousy, deceit, profanity, etc. are all equally a torturous attack on God's very being, although the people involved may be unaware of the depth of what they are doing.  Sins which the Bible lists as criminal offences are also destructive of human society or individuals, but all sin is against God primarily.

Second, in answering this question about Jesus attending a gay wedding, we must be clear in understanding the difference between acceptance and approval.  We often confuse the two and think that to accept someone is to approve of their actions.  Sometimes in our haste to reject offensive actions, we reject people.  Or we swing to the opposite extreme and in our desire to accept people and show them the love of God we give approval to their sinful actions or, at least, downplay the seriousness of them.  But we see, in the life of Jesus, the perfect balance of loving and accepting people without approving or condoning wrong actions and lifestyles.  And Jesus was successful at it because most of the people liked to be around Him.  It was primarily the religious people who opposed and rejected Him.

Part of the problem comes with how we identify people.  We think of people in terms of what they do: he is a politician, she is a police officer, etc.  When it comes to sinful actions we also identify people by what they do: he's gay, she's a thief, he's a murderer, she's sleeps around, etc.  Jesus never did that.  He was not in denial of people's actions.  He knew Judas would betray Him long before it happened.  He knew Judas, as treasurer, was a thief as well.  But Jesus looked beyond that to who God created people to be and to who they could become.  We see this especially in the parables recorded in the gospel of Luke.  Jesus describes people as lost coins, lost sheep, or even the lost son whom the Father was longing to return home.  The main problem is not the outward manifestation of rebellious actions, the main problem is that people are lost - separated from God.  They need to be found and restored to relationship with their loving Father.  [Hint:  In order to find someone or something, you have to be where they are.]  The problem is, of course, compounded by the fact that in our rebellious state we do not want God, at least, not the real God of the Bible.  Nevertheless, we have to see people as Jesus saw them - lost, hurting and running from the very One Who is everything they really need.

Inviting Jesus To A Gay Wedding

Jesus straightened up and asked her, “Woman, where are they? Has no one condemned you?”

“Then neither do I condemn you,”

Considering all of that, how are to answer our question of whether Jesus would attend a gay wedding?

As we look at Jesus in the gospels we find a Person Who moved comfortably in everyday society.  Sometimes we have a "religious" view of what society was like in the days of Jesus.  It probably was not much different than today as far as people's lives go.  Adultery was by no means rare.  There was corruption at the highest levels of government including the High Priest.  There was oppression and injustice.  All kinds of sexual immorality was around, although not as open as today.  Yet Jesus accepted people without approving of their actions.  Prostitutes, extortioners and others were comfortable around Him.  For the first time, they felt God loved them.  For some it became a turning point to finding God, for others it was a taste of heaven that they would ultimately reject.

So, in our modern day life, would Jesus attend a gay wedding?  Much to the shock of some, I think He would with two exceptions:

1.  If the gay wedding was a deliberate, conscious attempt to mock God or traditional marriage [as some are especially by radical activists] or to draw Him from acceptance of the people to the approval of the act, then I do not think He would attend.   Some gay marriages are simply two people of the same gender who are sexually attracted to each other and so want to marry without any deliberate or conscious attack on God's character.  It is just two individuals wanting to get together for mutual benefit.  The same could be said for many heterosexual marriages.  Although within the bonds allowed by God, they still fall short of what God intended marriage to be.

2.  If one or both of the couple claim to be Christians, then I do not think Jesus would attend the gay wedding.  The reason being that a gay relationship is clearly against the will of God as revealed in the Bible.  To attend a gay wedding where one or both of the couple claim to be Christian would be to give legitimacy to the claim to be both a practicing homosexual and a Christian.  Paul makes clear we are not to do that [1 Cor. 5:11].  If neither party claims to be a Christian then attending is accepting them as people loved by God without approving of the action.

But I am saying that you shouldn’t act as if everything is just fine when a friend who claims to be a Christian is promiscuous or crooked, is flip with God or rude to friends, gets drunk or becomes greedy and predatory. You can’t just go along with this, treating it as acceptable behavior. I’m not responsible for what the outsiders do, but don’t we have some responsibility for those within our community of believers? God decides on the outsiders, but we need to decide when our brothers and sisters are out of line and, if necessary, clean house.  1 Cor. 5:9-13, The Message

Special note:  For a Christian minister to officiate at a gay wedding would be moving beyond the acceptance of the people to approval of the actions.  It would be the sin of Balaam.  Balaam tried to curse Israel, a nation then blessed by God.  In this case, it would be to try to put the blessing of God on a union that is not blessed by God.  In essence, it would be witchcraft: trying to manipulate the spiritual for personal reasons.  On the other hand, for a civil servant to perform the ceremony in a nation which had legalized gay marriage is to the put the blessing of the government, not God, on the union - although none should be forced to do so against their conscience.

In the case of civil servants performing the ceremony of a gay wedding on behalf of the government or Christian businesses providing flowers or a wedding cake, etc.  each would need to examine their own hearts as to whether they considered their actions accepting people loved by God or approving sinful actions and act courteously and respectfully accordingly keeping a clear conscience before God.

Another Special Note:  Some gay couples have deliberately targeted Christian businesses and then sued them for their polite refusal to participate.  No business owner - Christian or otherwise - should be forced to provide goods or services against their conscience.  Such targeted bullying should be strongly objected to by everyone regardless of their views on this subject.

For other perspectives read: Why No Christian Should Attend A Gay Wedding and Christians Should Not Attend Gay 'Weddings'. Also see, Is America Running Out Of Patience With LGBT Activism?

Your comments for or against this article are welcome as long as they do not contain personal attacks or profanity.