Several years ago I was in Africa in a little country where an enemy had taken over the government. There was great oppression against the Christians by the new government. The first night I was there some of the native Christians were commanded to come to the police station to be registered. When they arrived they were arrested and during the night they were secretly executed. The next day the same thing happened with other Christians. The third day it was the same. By that time the entire district realized that the Christians were being systematically murdered. It was the intent of the new government to eradicate them all - men, women, and children - much as Hitler tried to eradicate all the Jews.

I was to speak in a little church on Sunday morning. The people came, but I could see fear and tension written on every face. All durning the service they looked at each other, their eyes asking the same questions: "Will this one I am sitting beside be the next one to be killed? Will I be the next one?"

I looked out on that congregation of black and white faces. The room was hot and stuffy. Moths and other insects came through the screenless windows and swirled around the naked light bulbs hanging over the bare, wooden benches upon which the natives sat. They were all looking at me, expecting, hoping, that I could bring them a word from God for this tragic hour. 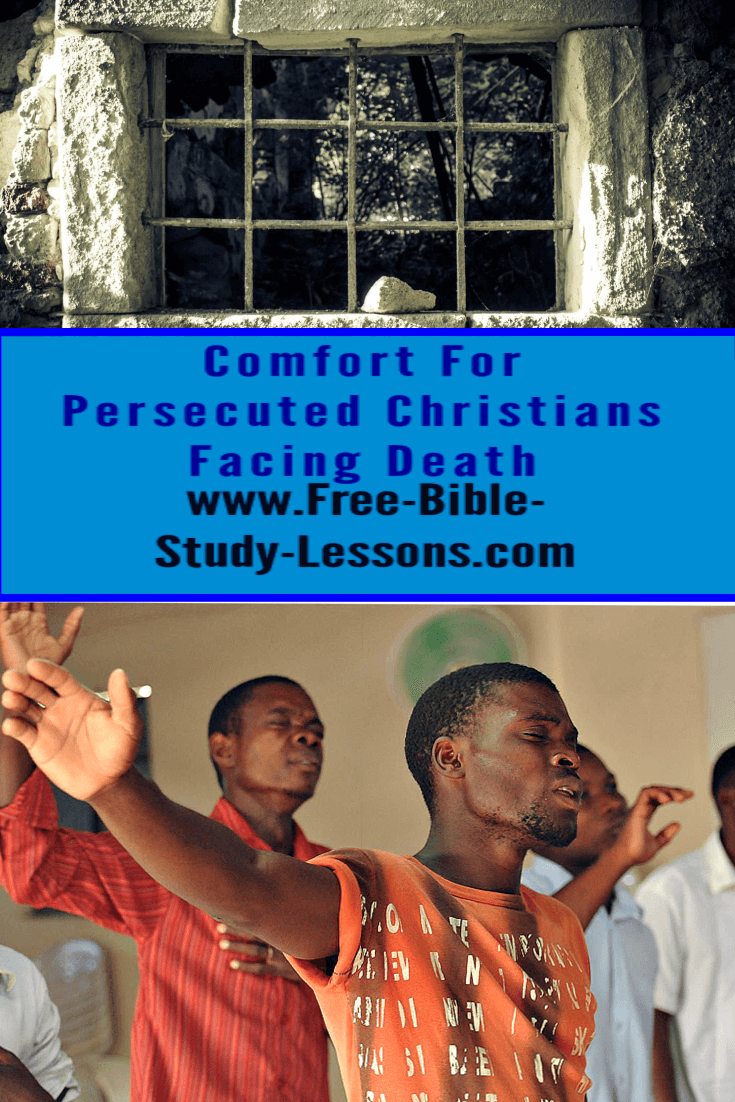 I opened my Bible and read 1 Peter 4:12-14 [Phillips]. "And now, dear friends of mine, I beg you not to be unduly alarmed at the fiery ordeals which come to test your faith, as though this were some abnormal experience. You should be glad, because it means you are called to share Christ's sufferings. One day, when he shows himself in full splendor to men, you will be filled with the most tremendous joy. If you are reproached for being Christ's followers, that is a great privilege, for you can be sure that God's Spirit of glory is resting upon you."

I closed the Book and began to talk, simply, as an aunt would talk to her nieces and nephews. "When I was a little girl," I said, "I went to my father and said, 'Daddy, I am afraid that I will never be strong enough to be a martyr for Jesus Christ.'

"'Tell me,' Father said, 'when you take a train trip from Haarlem to Amsterdam, when do I give you the money for the ticket? Three weeks before?'

"'No, Daddy, you give me the money for the ticket just before we get to the train.'

"'That is right,' my father said, 'and so it is with God's strength. Our wise Father in heaven knows when you are going to need things too. Today you do not need the strength to be a martyr; but as soon as you are called upon for the honor of facing death for Jesus, He will supply the strength you need - just in time.'"

I looked out at my African friends. Many of them had already lost loved ones to the firing squad or the headsman's axe. I knew that others would surely die that week. They were listening intently.

"I took great comfort in my father's advice," I said. "Later I had to suffer for Jesus in a concentration camp. He gave me all the courage and power I needed."

My African friends were nodding seriously. They, too, believed God would supply all their needs, even the power to face death bravely.

"Tell us more, Tante Corrie," one grizzled old black man said. It was as though they were storing up all the truth they could so they could draw on it in the day of trial.

I told them of an incident that had taken place in the concentration camp at Ravensburck. "A group of my fellow prisoners had approached me, asking me to tell them some Bible stories. In the concentration camp the guards called the Bible "das Lugenbuch" - the book of lies. Cruel death punishment had been promised for any prisoner who was found possessing a Bible or talking about the Lord. However, I went to my little cot, found my Bible, and returned to the group of prisoners.

"Suddenly I was aware of a figure behind me. One of the prisoners formed the words with her lips, 'Hide your Bible. It's Lony.' I knew Lony well. She was one of the most cruel of all the "aufseherinen" - the women guards. However, I knew that I had to obey God who had guided me so clearly to bring a Bible message to the prisoners that morning. Lony remained motionless behind me while I finished my teaching and then I said, 'Let's now sing a hymn of praise.'

"I could see the worried, anxious looks on the faces of the prisoners. Before it had been only me speaking. Now they, too, were going to have to use their mouths to sing. But I felt God wanted us to be bold, even in the face of the enemy. So - we sang.

"When the hymn was finished I heard a voice behind me. 'Another song like that one,' she said. It was Lony. She had enjoyed the singing and wanted to hear more. The prisoners took heart and we sang again - and again. Afterwards I went to her and spoke to her about the Lord Jesus Christ. Strangely, her behavior began to change until, in a crude sort of way, she became a friend."

I finished my story and stood silently while the words took their effect on my African friends. "Let me tell you what I learned from that experience," I told them. "I knew that every word I said could mean death. Yet never before had I felt such peace and joy in my heart as while I was giving the Bible message in the presence of mine enemy. God gave me the grace and the power I needed - the money for the train ticket arrived just the moment I was to step on the train."

The faces before me broke into broad grins. Gone were the wrinkles of fear and anxiety. Once again their eyes were flashing with joy and their hearts were filled with peace. I closed the service by reading a poem of Amy Carmichael.

We follow a scarred Captain,
Should we not have scars?
Under His faultless orders,
We follow to the wars,
Lest we forget, Lord, when we meet,
Show us Thy hands and feet.


The meeting was over and the Africans stood to leave. Then softly, in the back of the room, someone began singing an old gospel song.

I don't know how many were killed that week, but someone told me that more than half those who had attended the service met a martyr's death - and thus received a martyr's crown. But I know that God's Spirit of glory had been resting upon them.